The Project of a Lifetime

My project of a lifetime really began when I was nine years old and in the throes of confusion and embarrassment as I hit full puberty years before my classmates. I swiped one of my mother's nursing manuals -- which dealt with pediatrics and puberty in very technical terms -- to try to figure out what in the world was happening to my body.

I wrote down the highlights -- misinterpreted from the highly technical medical language -- and fashioned my version of the facts of life and puberty in a handwritten book I made for my younger brother Mike so he would never suffer through such confusion.

Mike, who grew up to become an M.D., was wide-eyed and bewildered as he read the book, memorizing parts of it, the better to torture me later on. "And you wonder why I've never married!" he would joke in years to come before finally marrying happily in midlife.

Some years later, after earning undergraduate and graduate degrees in journalism at Northwestern University's Medill School of Journalism, I moved sullenly back to L.A. instead of following my heart to New York. Living was cheaper in L.A. and I had student loans to pay off. I was mortified as I watched my Medill friends get jobs at The New York Times, The Chicago Tribune, McCall's and The Wall Street Journal while my best prospect in L.A. for working in national media was 'TEEN Magazine.

And then something wonderful happened: I realized how fortunate I was. It wasn't just that working at 'TEEN for nine years allowed me to develop a writing specialty in health and psychology, or that my fellow 'TEEN staffers would be the best co-workers I would ever have, some becoming cherished, lifelong friends. The most wonderful thing was coming to realize that at 'TEEN I could truly be of help to young girls who were wondering, as I had once wondered, what was happening with their bodies and how to make healthy choices and if anyone would ever really love them. 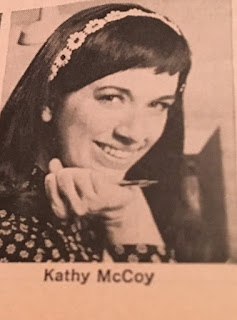 At 24, as Feature Editor of 'TEEN Magazine


I wrote several self-help articles a month in 'TEEN from the late sixties and through most of the seventies as well as doing 'TEEN's "Dear Jill" advice column and editing the "Dear Doctor" column with Dr. Charles Wibbelsman, a young adolescent medicine specialist. Chuck and I used to dream about how great it would be to answer urgent questions from teens without space limitations or having to worry about advertisers objecting to our information or opinions.

That dream came finally came true, with the help of a wonderful literary agent named Susan Ann Protter, when Chuck and I wrote a book together, combining questions from 'TEEN readers as well as his patients with frank, down-to-earth, warmly reassuring answers about so many areas of teen concerns.

THE TEENAGE BODY BOOK was first published in 1979 by Pocket Books/Simon&Schuster. It sold hundreds of thousands of copies, won the "Best Book for Young Adults" award from the American Library Association and morphed into a number of editions over the years with updates published in 1984, 1987, 1992, 1999 and 2008. 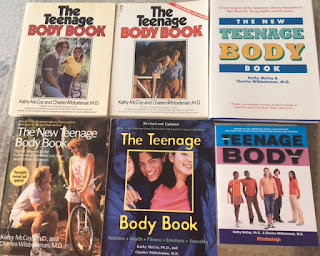 Over the years, this book has led to a variety of adventures. The 1987 edition landed us spots on Oprah and The Today Show. And that edition also sparked protests from religious groups and a brief media storm in Boston in 1990 because of its frank discussion of sexuality.  I was tapped to fly to Boston to defend our book on television and in a contentious town hall meeting. It was a great experience in giving and receiving empathy (as we all realized that we were united in wanting teens to be healthy and safe, only disagreeing on how to do this) and it influenced editions to come. Over the years, the book has changed, giving more attention to the full range of choices and beliefs that teens and their parents have in these increasingly diverse times.

Now we're happily awaiting the publication of the 7th edition of THE TEENAGE BODY BOOK on August 28 by HatherleighPress/Penguin Random House. This one will be for the first generation of teenagers born in the 21st century. It will also be the first edition to be available as both a print book and an e-book. 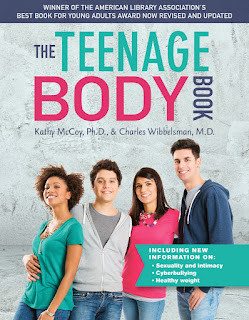 
A trailer for Teenage Body Book 2016


I can't help smiling as I look forward -- and back.

Who knew that the error-filled homemade guidebook to puberty that traumatized my wide-eyed little brother so many years ago was a sign of a career to come?

Who knew that the job that seemed so unpromising at the beginning was the best possible start in a professional direction that was simply meant to be?

Who knew that shared discontent over the limitations of a magazine column would lead to a 40 year partnership of three: between Chuck and me and Bob Stover, who did the illustrations for THE TEENAGE BODY BOOK, and whom I married in 1977 as we were working on that first edition?

Who knew that my experience of an awkward and alarming passage through early puberty would spark a lifelong mission to help and inform and reassure so many other young people?

What a delightful surprise and wonderful journey it has been.