The realization hit as I was visiting my brother Mike and his family last week when they were at their Los Angeles home briefly before returning to their home base in Thailand for the holidays: I pile stress on myself with expectations that a holiday must be as perfect as possible.

Mike and I decided to celebrate Christmas together this past Wednesday and a big part of this was preparing a holiday meal. I expected we would do the shopping a day or so before. But Mike was comfortable waiting until Wednesday morning.

What?? I was quietly aghast.

Memories of Christmases past flooded back: the times I had cooked the turkey the weekend before Christmas so that everything would be perfect and ready to serve mid-day so that Aunt Molly wouldn't have to drive home in the dark. Even after Aunt Molly's death, I tended to have the turkey in the oven in the early morning hours. Was it even possible to properly roast a turkey with this late start? I was worried.

But Mike was confident as he, his five-year-old daughter Maggie and I hit the local market. He found a lovely fresh turkey. We gathered up all the ingredients for my signature dressing plus potatoes and fresh vegetables. The turkey was in the oven by noon and soon the house was filled with the lovely smells of a holiday dinner in the making. 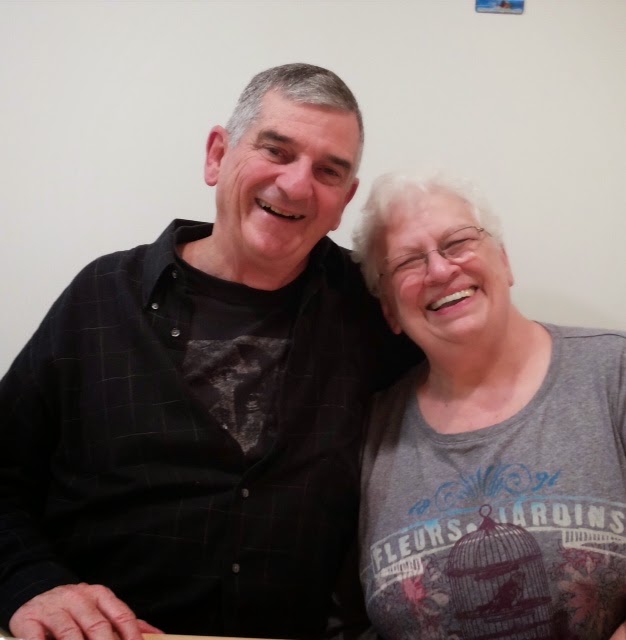 Mike and I relaxing as the turkey roasts:
A new concept for me!

Maggie watched and helped as I made the dressing, noting and exhaulting in each step, asking "Is it done yet?" all along the way, but hanging in there eagerly to the end.

Finally, it was done. We wrapped the dressing and put it in the refrigerator, to be warmed again closer to the time we would be serving dinner.

But some of the guests were late, caught in hideous West Los Angeles holiday traffic. Mike and Amp's two year old son Henry, sick with the flu, was screaming himself to sleep. Finally, he was silent in feverish slumber. His exhausted mother Amp announced that she was going to walk a block to the versateller and disappeared for several hours -- doing a last bit of Christmas shopping and catching her breath after a trying day and night with an ailing and cranky child.

Mike surveyed the perfectly browned turkey, cooling on the counter, and smiled. "Maybe we ought to make sure it's okay," he said, slicing off bits of white and dark meat and removing a wing. We sat at the table, sampling, satisfied with our work.

The mashed potatoes and dressing were cooling in their serving dishes. The gravy was ready for reheating in a pan on the stove. The turkey was rapidly cooling -- and looking a bit diminished as Mike and I continued to nibble. Maggie was intent on playing with her dolls and doll house, having enlisted the first arriving guest Nora to play out her fantasy scenario with her.

The clock ticked on. Dinner cooled. The turkey looked shopworn. My brows furrowed with worry. "Maybe we ought to start reheating everything...." I said, getting up and moving toward the stove. My brother smiled.

"Just relax," he said. "People will eat when they get here, when they want to. It doesn't have to be or look perfect."

I sat down and took a deep breath. He was right. It was his home and his party and I needed to let go of my desire to have everything just so.

Some guests arrived. Some sat down at the table and filled their plates. Others dawdled, talking, in the family room. Another joined Maggie and Nora in play. And Amp eventually returned with presents and good cheer, nibbling bits of turkey and dressing as she visited with guests. Even Henry woke up feeling like celebrating and smiling broadly when family friend Viviene gave him a teddy bear that recited "The Night Before Christmas."

It was lovely. There was good conversation, thoughtful gifts, much savoring of food and many hugs. No one seemed to mind that some of the food was lukewarm or that dinner was more of a group graze than a formal sit down affair. Comfort and good cheer were in the air. 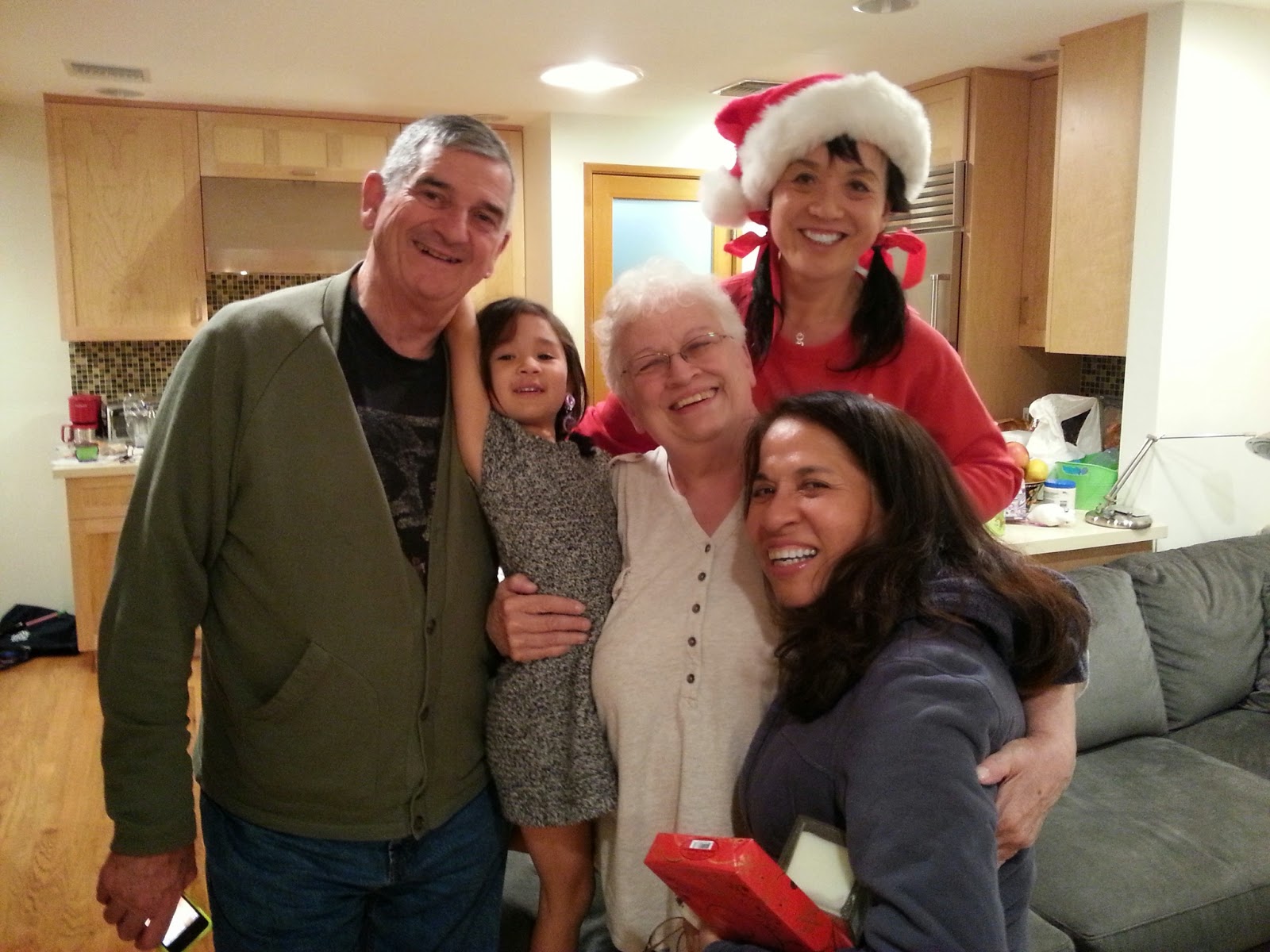 After the graze: Mike, Maggie, me, Vivo, Nora 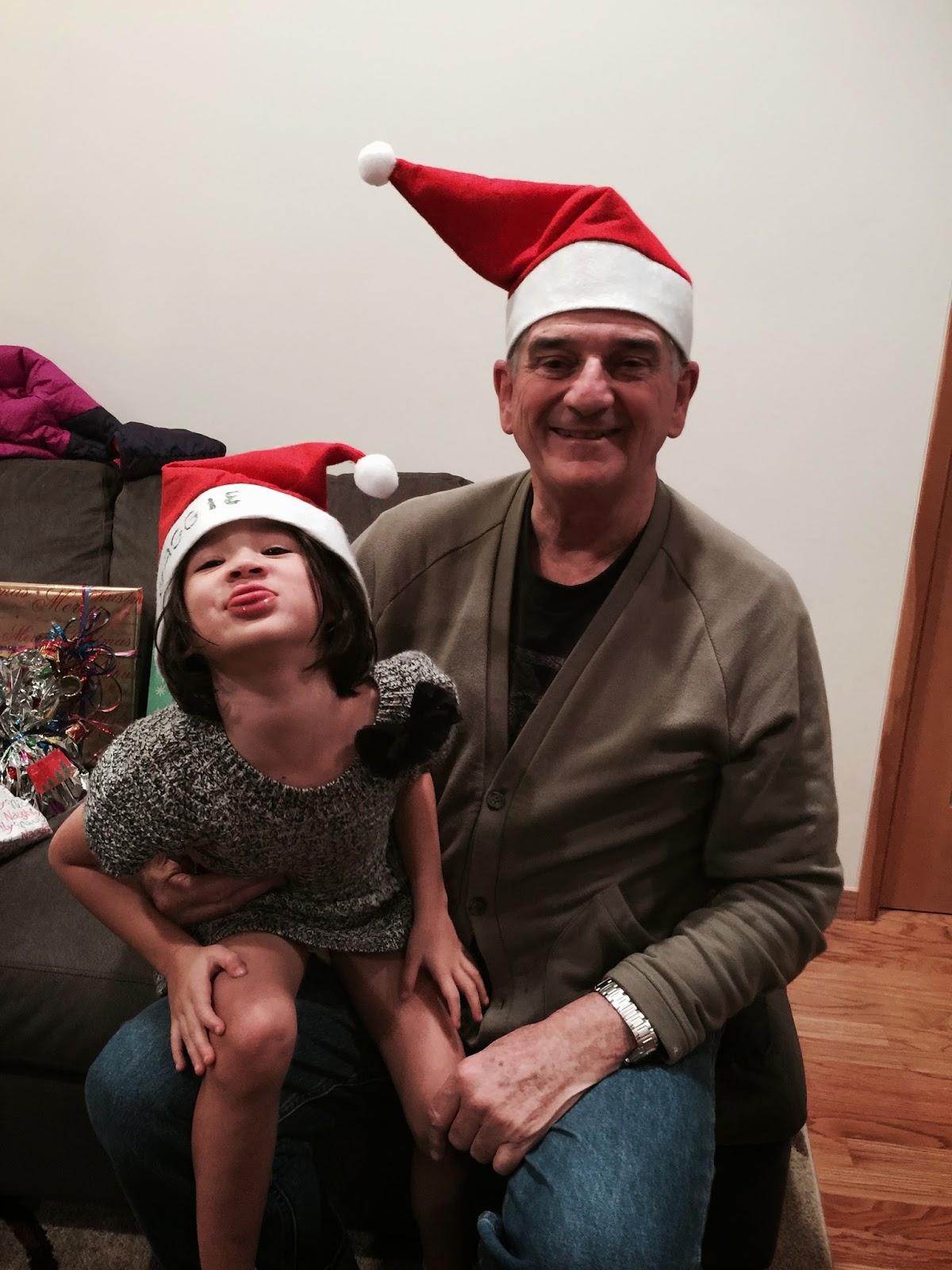 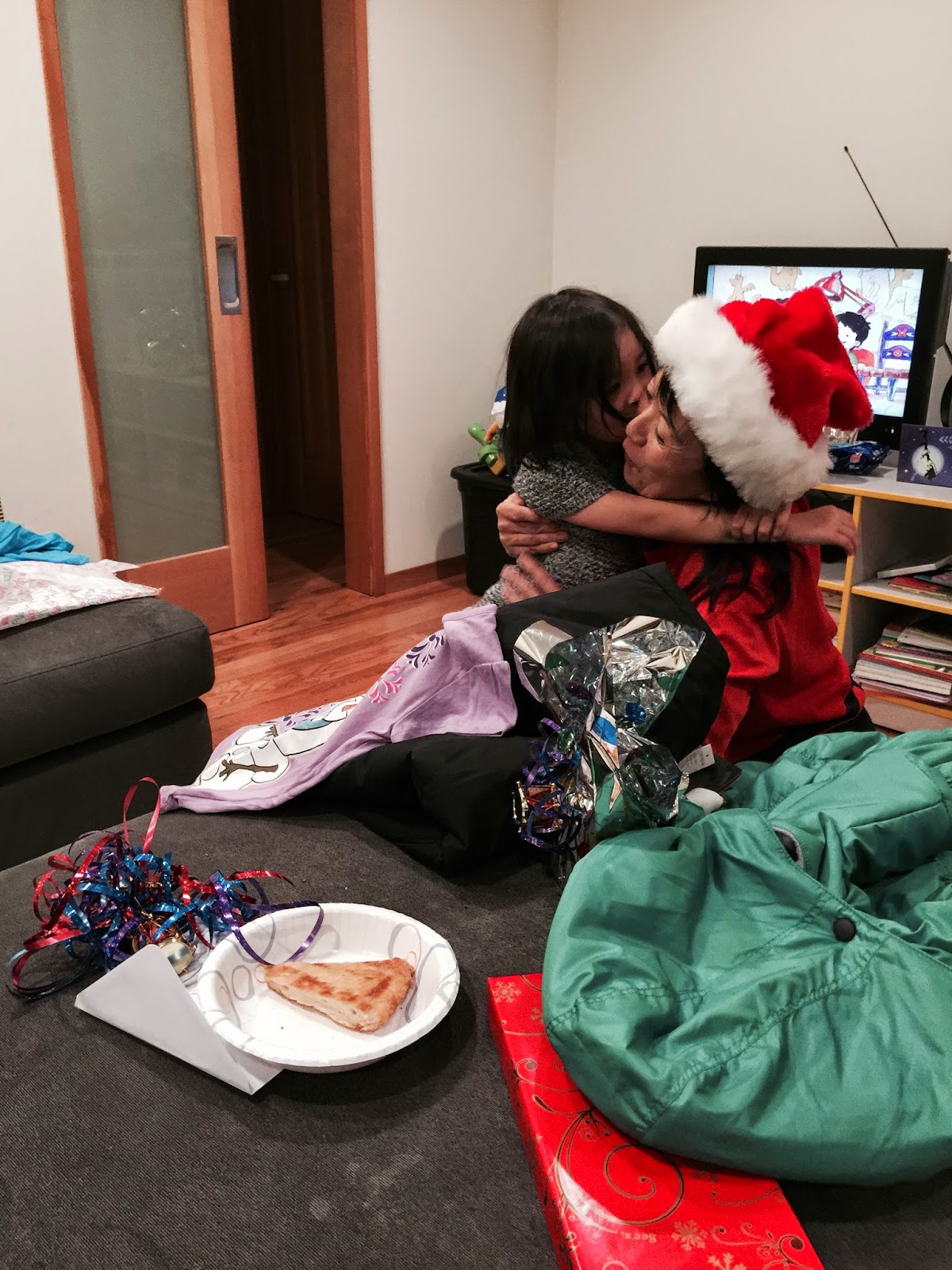 Maggie thanks Vivo for a perfect gift

When I returned home to Arizona the next day, Bob had put up our Christmas tree but left the decorating to me because he knows how much I enjoy that. I immediately found the box of ornaments -- all hand made by his parents in the eighties -- and put them on the tree, preoccupied by loving memories of his dear mother, gone for more than 25 years now.

Then I went to the bedroom to unpack. Minutes later, I returned to a chaotic scene: our male cats Hammie and Ollie had climbed into the tree and were wrestling with each other and seizing ornaments in their teeth and flinging them down. The tree skirt --also made by Bob's mother -- was dragged into the middle of the living room and was bunched up with chewed up newspapers. They had, indeed, been busy in my brief absence.

I shouted at both of them and they scampered out of the tree, shaking more ornaments down. I put ornaments and the tree skirt back in place. I cleaned up the shredded newspaper. All was well.

Until an hour later. I returned to the living room and saw the tree shaking. Hammie and Ollie were at it again, this time wrestling under the tree and snagging the less valuable ornaments (purchased rather than those made by Bob's parents) that I always put on the lower branches.

And so it has continued... despite drenchings from our mister and stern admonitions. 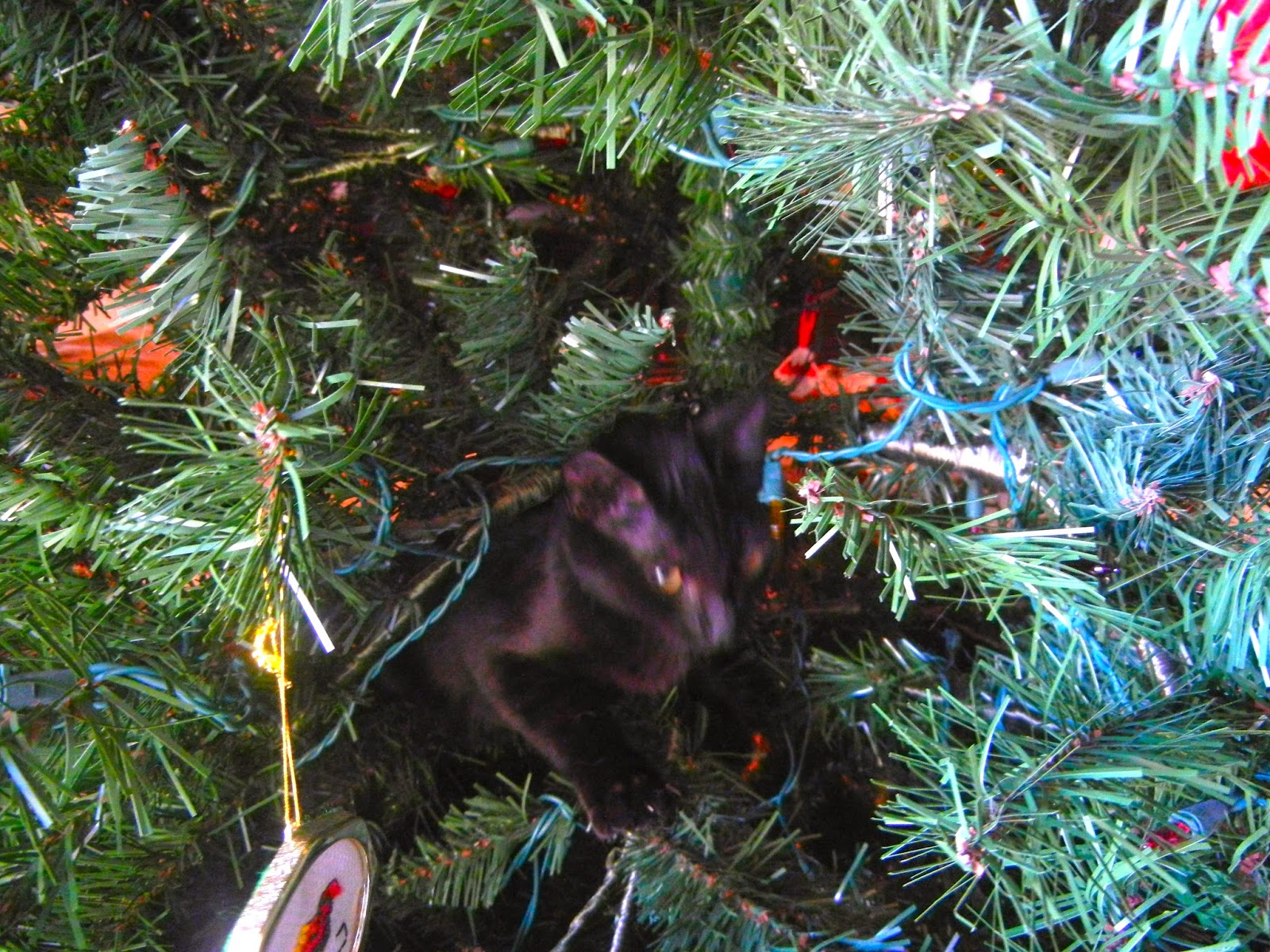 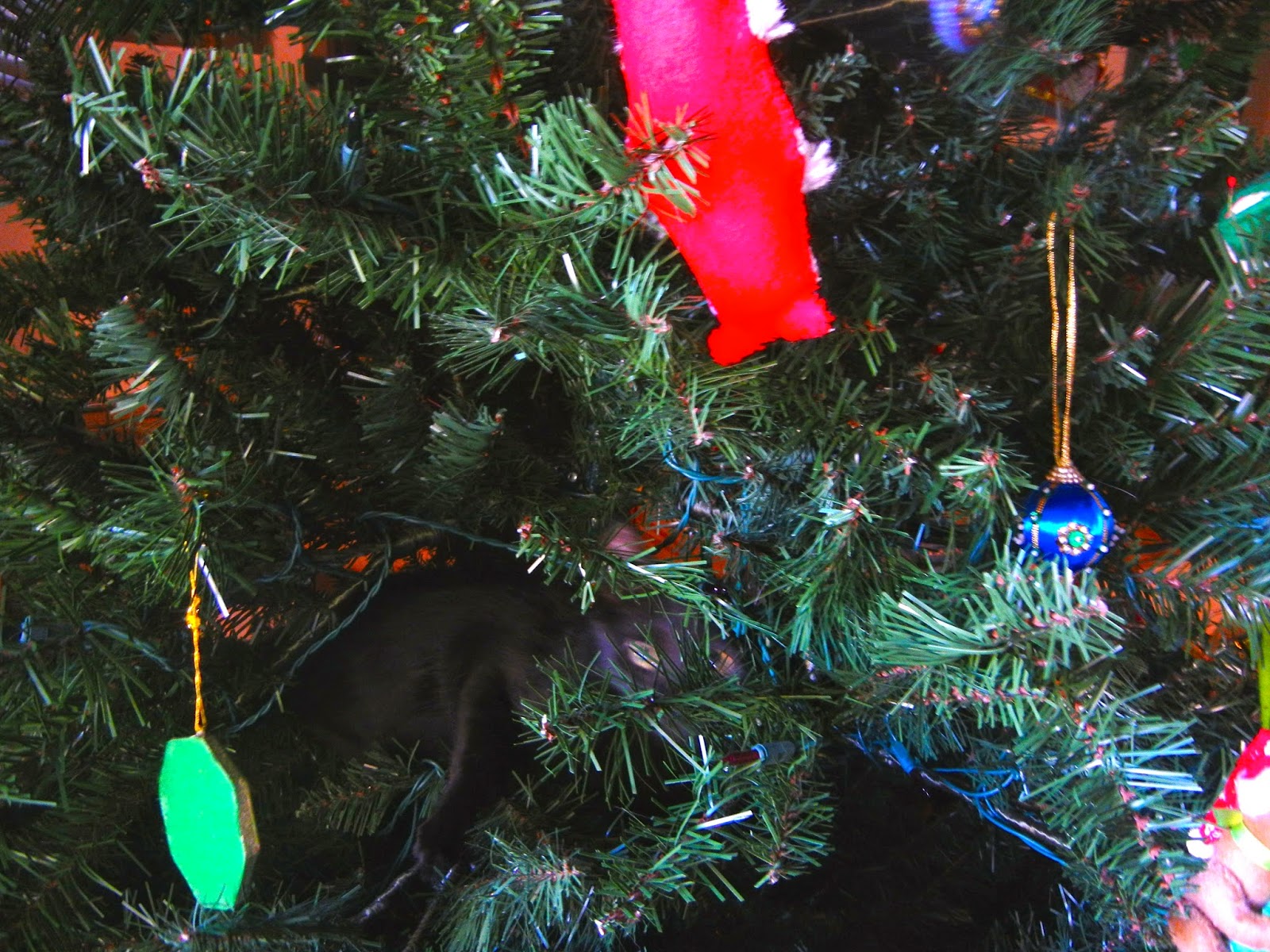 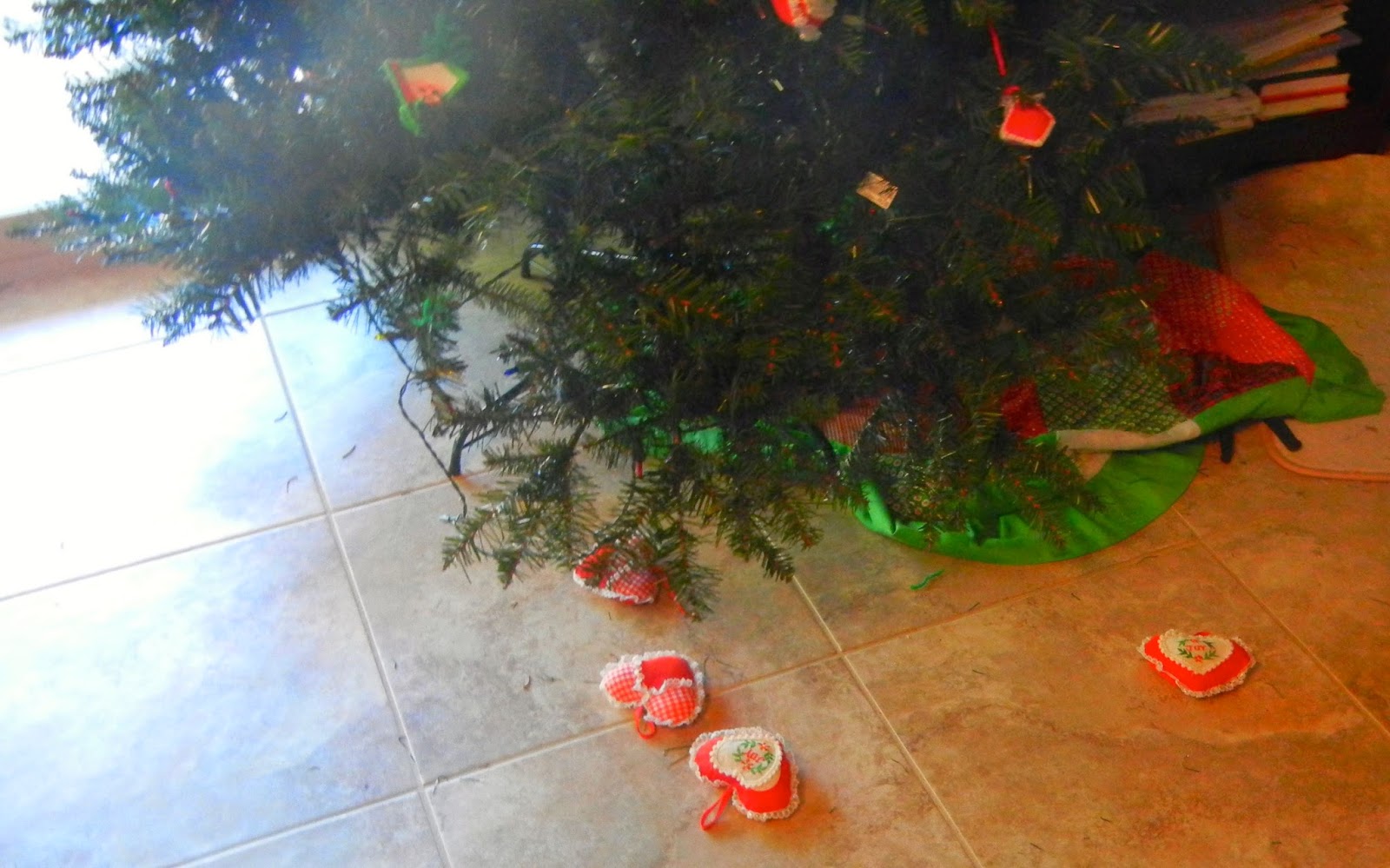 Feline re-arrangements for an imperfect tree 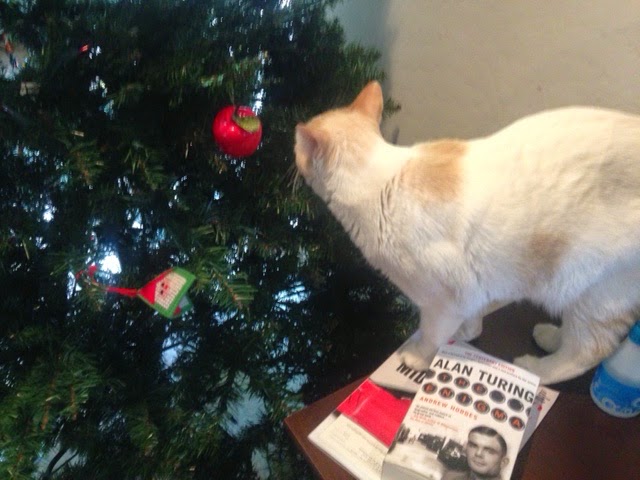 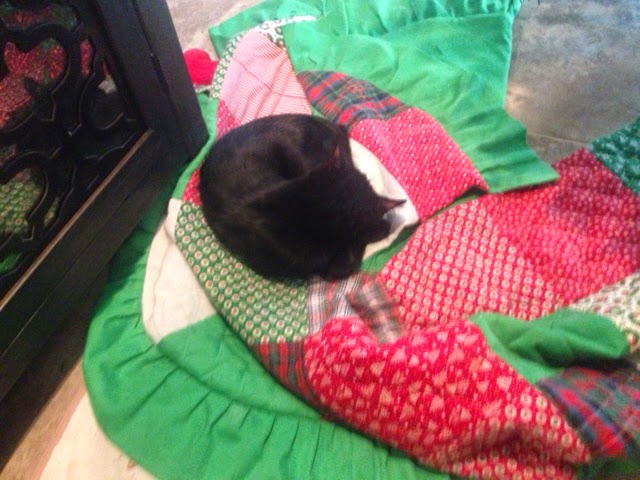 I'm taking another deep breath and am beginning to see the living room not as a chaotic mess, but as a family decorating project. Perhaps the traveling tree skirt and widely spread ornaments are my cats' contribution to holiday decor and cheer. And wrestling cats in the tree add a novel twist to our traditional holiday celebration.

Holiday perfection is an elusive and stressful goal. Being content and at peace with what is can make for a much happier holiday... 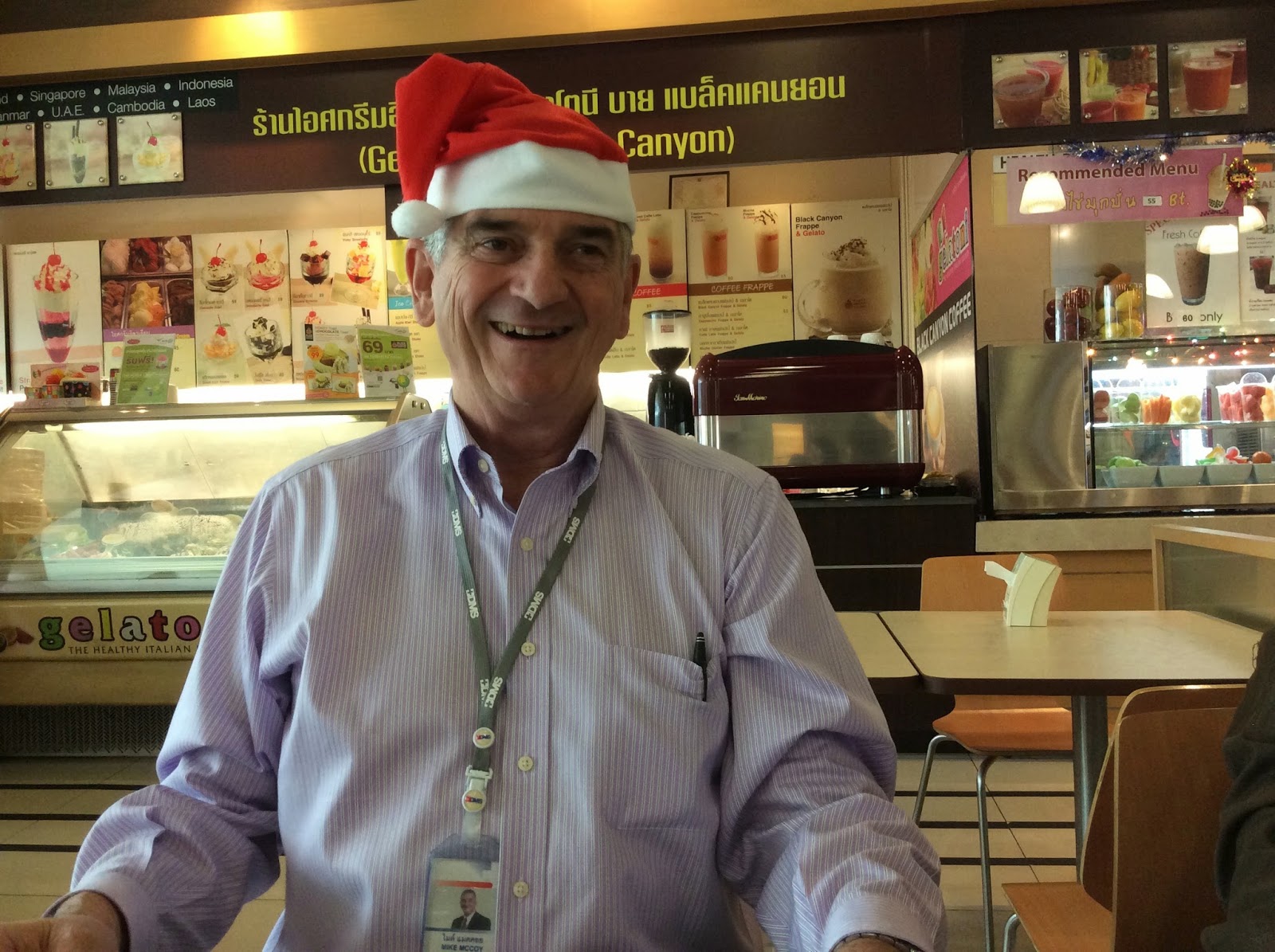 Whether Christmas is a work day, as it is for
Mike, now back in Bangkok, taking a break at
his hospital's cafe 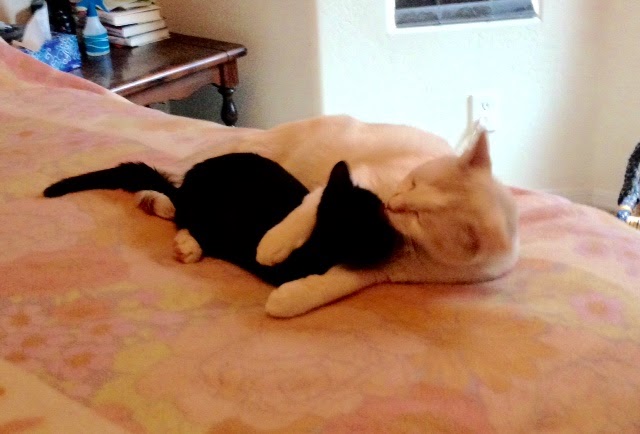 Whether it's embracing or tussling with those we love 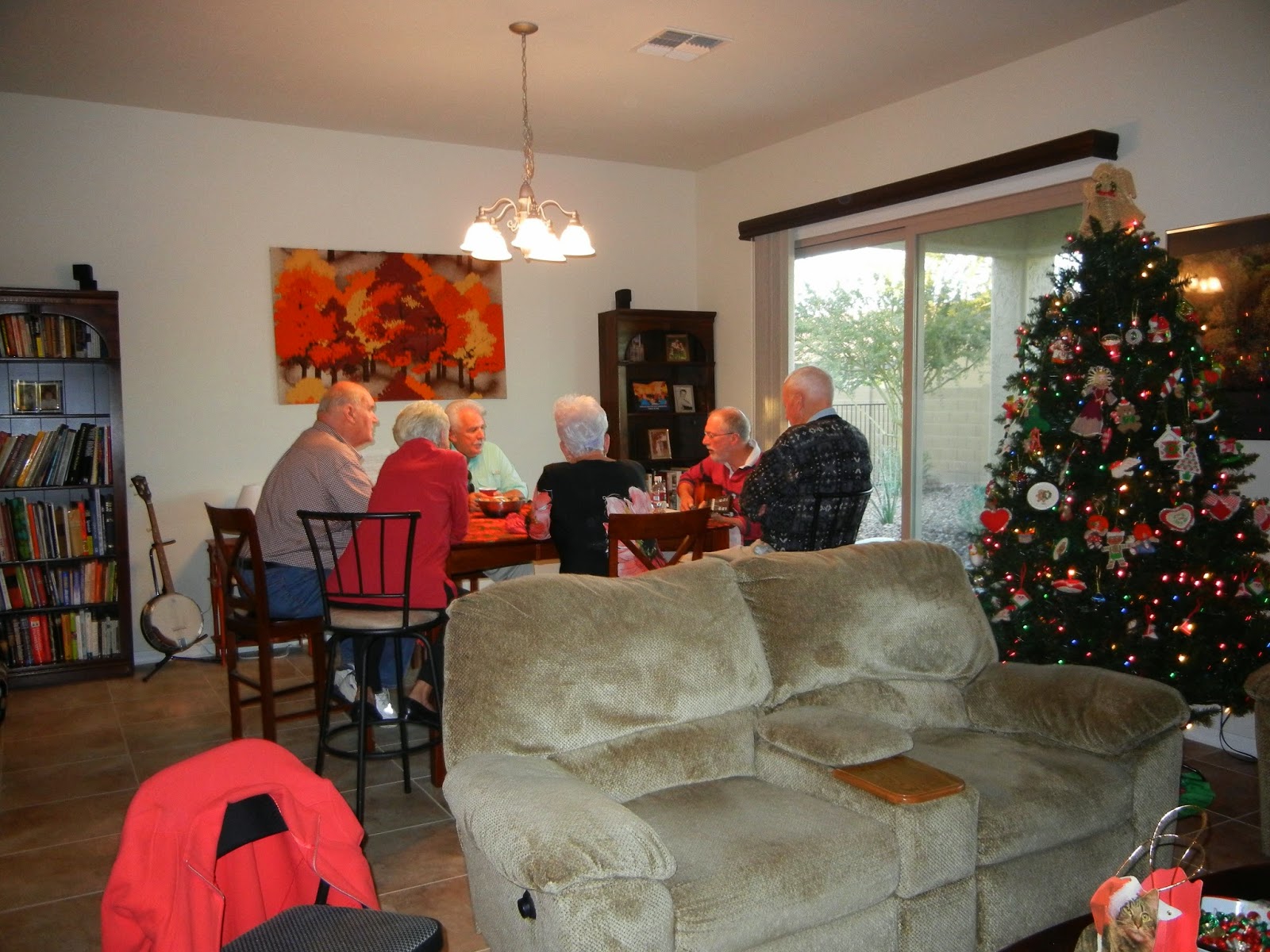 Whether or not you're on key, feeling the
pleasure of caroling with friends...

No matter how perfect or perfectly imperfect your holidays may be, here's wishing you love, laughter, happy feasting, fun conversations and and a wealth of good will!