I went home again for the Memorial Day weekend.

It wasn't to my childhood home, but to my mother's home town in rural Kansas and to my warmest roots in that state: the Kansas City area home of my beloved cousin Caron and her delightful husband Bud. We were joined by Caron's brother Jack, also one of my very favorite relatives, who had driven in from his home in Georgia for the occasion.

There were several reasons for our getting together: Caron's health has been frail lately and I've been concerned. We all have. But spending time with her, I was reassured by her strength of spirit and firm resolve to regain her health and stamina. In the meantime, Caron, Bud and Jack are wonderful company and visiting with them is a total joy. When Jack arrived, a few hours after my plane came in, the three of us just stood in a tight huddle in Caron's living room, warmly embracing and kissing each other, so happy to be together once again. And we had also decided to share an adventure, traveling back into our mothers' pasts -- Caron and Jack's mother and my mother were close and loving sisters -- and go to their tiny hometown of Toronto, Kansas for the annual Memorial Day celebration. 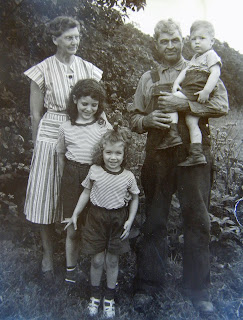 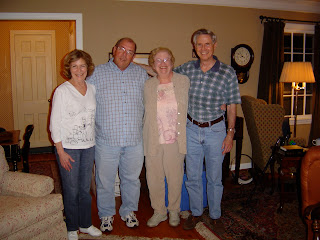 Memorial Day is special in Toronto. The whole town -- and kin who have left only to return to their roots for this one day -- turns out for a special service honoring fallen veterans, to decorate the graves of parents, grandparents and more distant relatives and to reconnect with far flung natives of this prairie farming town.

Our shared Curtis grandparents -- George and Gladys -- are buried there along with their son George Walter, who was killed in action in World War II when he was only 24 years old. Caron and Jack's parents -- Evelyn and Elmer Hill -- are buried beside our grandparents. And many other relatives -- 29 in all -- have graves in this peaceful, green, windswept cemetery. 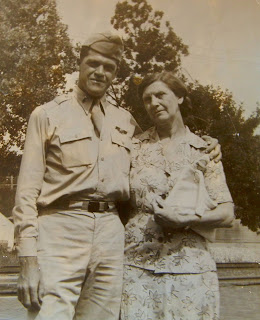 Last photo: Lt. George Walter Curtis and his
mother Gladys as he leaves for war. He
was killed two months later in October, 1944

In 2007, I made this trip to our mothers' pasts only with Jack and it was a wonderful, memorable adventure. This time, we were returning as a larger, multi-generational group. Caron, Bud, Jack and I were joined by Caron and Bud's youngest son Jason, his wife Molly and their two wonderful children Ian, 10, and Maya, 8.

Caron told me that Jason, nearing middle age and seeing his parents aging, was increasingly interested in family history and roots, wanting to hear stories about departed family members and to see where our ancestors had farmed and thrived. And Jason wanted his children to begin to learn about their roots as well.

In preparation for the day, the family had talked with the children about World War II and the terrible sacrifices so many made -- and the young life, sacrificed for freedom, that our whole family honors and mourns to this day.

The service at the cemetery began with a tribute to the area's World War II veterans, whose ranks are thinning all too rapidly. A small contingent of aging veterans stood at attention, remembering their commander Leslie Sherman, who had led this tribute last year and who passed away only a few months ago. This year, his younger brother Ed gave the commands to the elderly veterans as they honored the fallen with hand and gun salutes. 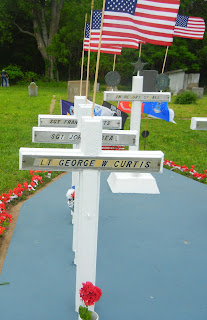 Ian and Maya watched with rapt attention, Maya flinching slightly at the sound of gunfire, her older brother putting a protective arm around her. After the ceremony, their father took them to meet the old soldiers, to shake their hands and thank them for a job so well done. And they returned to our group, quiet with wonder at meeting real soldiers from that long ago war.

And the children listened as we walked through the cemetery, their great-uncle Jack, a Vietnam veteran, telling them stories of several generations of grandparents and extended family. 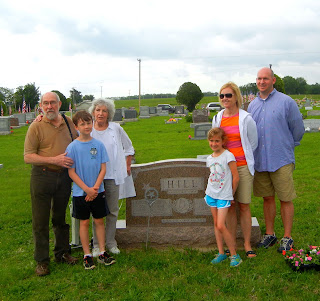 Spotting the gravesite of  great-great-great grandparents who died a week apart, 10-year-old Ian was pensive, lingering, wondering about this long-dead couple. "Grandma," he said quietly to Caron. "These people died a week apart! What happened? After his wife died, did he..."

His voice dropped to a near-whisper: "Did he commit suicide?"

Caron told Ian that this ancestor had died of a heart condition that many said was, more than anything, simply a broken heart. He nodded solemnly. 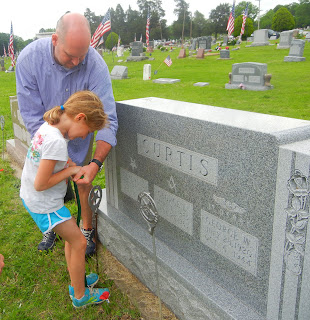 Maya and Jason dig hole to plant flowers at grave
of George and Gladys Curtis and their son George
Walter, shot down over Germany October 6, 1944 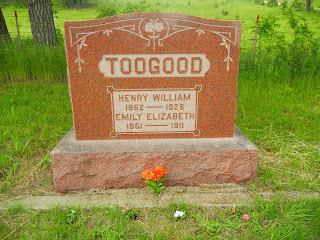 Our oldest ancestors in Toronto cemetery: Grandma Curtis'
parents who died years before any of us were born

As we finished visiting the family grave sites, a thunderstorm rolled in with torrential rain, quickly altering our plans for a family picnic at a local park. Ed Sherman, a second cousin of ours, invited us to his Toronto home where a Sherman family reunion was in full swing. They happily welcomed us -- the Curtis cousins -- in from the storm. There were loving words, warm embraces, and a stunning array of fried chicken, baked beans, potato salad and pie.

It made me think of those long ago Sundays at my grandmother's farmhouse when she would make the world's best fried chicken, mashed potatoes and gravy, freshly picked corn and watermelon and inimitably delicious apple pie. Relatives would drop by unannounced in large, joyfully welcomed groups to savor the endless abundance of good food, good conversation and warm hugs.

"Kathleen, I need a hug!" A middle-aged woman with a wonderful smile stood before me, her arms outstretched. It was my cousin Patti Sporing, the daughter of my mother's much younger sister Ruth.


I hadn't seen her in many years. In our childhoods, the six years between us seemed too large a gap for close friendship. She and my younger sister Tai were close and loved playing together. But as adults, even though we have encountered each other only occasionally, I have always been happy to see Patti. Each time, I've so enjoyed her warmth, her sense of humor and her stories about her life experiences as an expert horsewoman and a resourceful farm wife, mother of two boys and now as a grandmother. This time was no different. We talked about our lives, about our parents, about the town they all once called home.

Patti told me that she had discovered my blog while researching family history online and had been intrigued to read not only about our shared family members, but also about my immediate family of origin and the complicated relationships we had, especially with my father. She touched my arm. "We knew that something was going on with your family when your brother Mike came back here to live with Grandma and go to high school," she said. "But we didn't know what was wrong. We didn't know how bad it was. I'm so sorry." We embraced again.

And she remembered, as does my cousin Caron -- who spent several summers with my family and knew both of my parents well -- that my father always seemed so kind, so bright, so generous and loving. And I was quick to admit that he was all of those things -- as well as being an alcoholic prone to frightening, violent, irrational rages. He was complicated -- at once nurturing and abusive -- and while we, his children, loved and feared him, extended family saw only the love. I smiled at the gift of Caron's and Patti's perspectives. 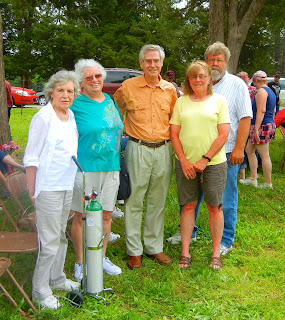 An older couple approached and said "Kathleen, honey, we haven't seen you since you were a very little girl!" The man -- Stanley Curtis -- is one of my mother's last surviving first cousins and, with his lovely wife Mary, he lives in my grandparents' original farmhouse. He rescued the house when a dam project in the late 1950's put the original farm under water. Stanley moved the house to a hilltop overlooking the newly created lake while my grandparents bought a new farm about 50 miles away. Stanley, a tall, strong man in his late eighties, who is still actively farming and who is, in addition, enthusiastically Internet savvy, looked wistful as his mind drifted to the past. He told me how he had admired my mother when she was vivacious young woman and he a little boy, 13 years younger. He marveled at her glamorous life as a famous American Airlines stewardess at a time when that career was highly unusual and few of her high school classmates ever left their small town. Mary asked about my writing, about my husband Bob, about my brother Mike and sister Tai, already remembering a great deal about the three of us.

"You're the writer, aren't you?" a younger middle aged man standing beside Stanley said. We had never met, but it felt like we knew each other well. He was Mark Sherman, an attorney and the son of one of my mother's first cousins, greeting me like an old friend. He told me that he had found many Curtis family pictures in another relative's home after that relative had died and he had scanned them to a disk he thought I might like to have. We exchanged business cards and talked easily out on the porch with Stanley and Mary and Ed Sherman, Ed's long time companion Marla and his 54-year-old daughter Nancy, a cheerful, vivacious woman whom I had not seen since she was a two-month old baby and I was a gawky fourteen year old. She smiled warmly and took my hand. 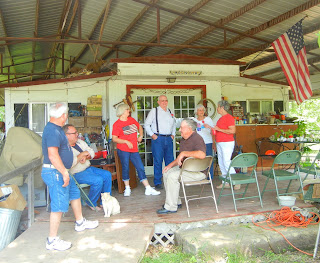 Reunion at Ed Sherman's: Stanley and Mary Curtis
(he in suspenders, she in white tee) are at center. Ed
Sherman is seated (brown shirt) and cat Shermie is
in his party animal element.

Even Ed's cat Shermie -- lounging on the deck -- was wonderfully cordial, purring and rubbing up against any guest who looked his way. Ed smiled when he saw me playing with his cat. "That cat is a survivor," he said. "That cat has been run over and even shot once. And he just keeps on going... just enjoying his life and everyone around him." 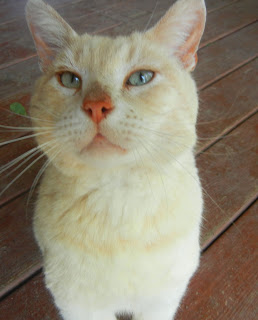 And I thought it was an apt description of this jovial extended family group, ranging from age 8 to nearly 90.  The people gathered at Ed's home had come from a variety of experiences and occupations. Some had stayed in or near Toronto, Kansas their whole lives. And some of us had grown up thousands of miles away. Our lives had taken many different paths, but, this one day,  all of these paths led to Toronto.

Now, this one day, we were home.

Caron's face glowed with love. "Isn't this wonderful?" she asked. "Everyone is so kind, so welcoming here. It's like no other place. Here, we truly belong."

I have always believed the sentiment "You can't go home again."

But now I know you can.

Because home is any place you truly belong.