A Sweet But Cautious Victory

The crowd was anxious, ready for a fight, mostly red-shirted in opposition to the copper mine. On November 7, several hundred citizens filled the bleachers at the Florence High School gymnasium, a last-minute substitute for the smaller Town Hall, for the critical Town Council vote on whether or not to allow an overlay of the community master plan to enable copper mining on residential land adjacent to the existing master planned community of Anthem Merrill Ranch. 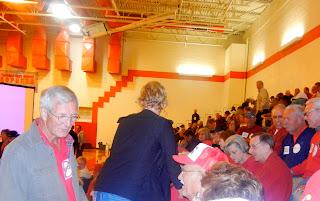 It is a controversy that has riveted the town in the past year. A large Canadian multinational corporation set up a subsidiary company called Curis after acquiring a parcel of residential property within the town limits of Florence. They knew it was zoned for homes and commercial use. But they were confident that they could arrange an overlay of the voter-approved master plan to change the zoning to allow an in-situ copper mine, drilling dangerously close to the main water supply of Anthem and other communities downstream. The prospect of having sulfuric acid and other chemicals pumped through the water table and possibly having their water supply polluted and the ambiance of the community compromised by the presence of a copper mine so close to homes spurred many citizens to action -- picketing Arizona Governor Jan Brewer in August when she came to Florence to speak in support of the mine at a Curis-sponsored dinner; attending a meeting of the Planning and Zoning Commission in October, speaking passionately against the mine in a meeting that lasted until 2 a.m. and ended with a vote against the overlay.

But the long awaited critical vote was that of the Florence Town Council.

In the months leading up to the vote, Curis has worked incessantly to win the support of citizens and has had some success, cynically playing on the hopes of those living in the depressed, older areas of downtown Florence, who desperately need jobs and dream of tax revenues for schools and parks. Curis has fed those hopes and dreams -- despite the fact that no in-situ mine has ever been so close to a residential community nor has the land or water affected by in-situ mining ever been restored to pre-mining levels. There were also relatively few jobs actually slated for the project and many of these would be highly technical  and not likely to be filled by locals. And, due to special tax breaks being sought by Curis, the tax revenue most likely would also fall short of community expectations.

Nevertheless, the promises by Curis have divided the town -- with a visible majority against the mine, but a vocal minority pleading for opportunity and, at the same time, expressing some bitterness toward the newer, generally more affluent citizens of the Anthem area of Florence. The divisiveness has been an additional stress on a town which -- like many across the U.S. -- is challenged by the recession.

In the weeks leading up to the Town Council vote, Curis, anticipating defeat, withdrew its application to use the land for mining. The game plan appeared to be that they were looking to start the mining operation on a parcel of state-owned land adjacent to the disputed parcel and planning to bring their application back to the Town Council next year, after elections had changed the composition of the Council, and a new roster of Council members might rule in their favor.

Anticipating a lawsuit if they didn't accept the withdrawal of Curis' application, the Town Council voted to allow it. However, they decided to go ahead with a vote on the overlay issue anyway. The overlay to permit the zoning change of the disputed land would be preliminary to what Curis wanted -- approval of the use of the land for mining.  The Town Council vote was 7-0 to reject an overlay that would permit mining on residentially-zoned land. 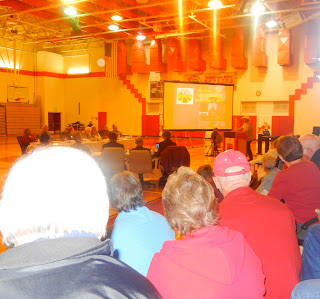 The Town Council, here in session, voted 7-0 against mining in town

So, for now, the victory is sweet. Passionate and well-organized citizens have prevented what could have been an environmental catastrophe for the town. And it's heartening to see that people can still have a voice against large, multinational corporations seeking billions in profits while leaving a community possibly devastated both environmentally and in terms of future growth.

But the fight isn't over. The day after the hearing, its stock plunging, Curis issued a press release to reassure nervous stockholders, stating that they were going ahead with plans to hire a Tucson-based engineering firm to start the mining project on the adjacent state land as soon as they obtain approval from ADEQ and EPA. Hearings on the later approvals will be held in Florence early next year and town officials are determined to fight to prevent such approvals -- with a lawsuit if necessary.

In the meantime, victory is somewhat bittersweet as well. Citizens who hoped the mine would bring new employment opportunities and revenues to Florence are disappointed and angry. Many of them walked out of last week's meeting en mass after their speeches in support of the mine and as citizens against the mine began to speak.

So, while enjoying the victory of the moment, those of us who have opposed the mine are also becoming increasingly aware of the need to heal some of the wounds this passionate fight has produced, to find ways to reach out to fellow citizens and to discover new possibilities for job opportunities for people who are so in need of hope. Although the copper mine has seemed to many of us a greater risk than a potential benefit to the town, our greatest challenge now may be to work together to find ways to help Florence and its citizens to grow and prosper.