November 1 is a banner day for me, a day that has brought so much happiness to my life.

It marks the day 36 years ago that Bob and I first met. (The subject of a future post, for sure!)

It is the birthday of three very different but treasured friends: Barbara Ferrell, a longtime friend from acting days,  Pat Cosentino, a new friend here in Arizona and actress Mary Kate Schellhardt, the beautiful and talented daughter of my dear friend Tim Schellhardt.

But the gift of November 1st that I'm highlighting today is my brother Mike, who was born on this day 63 years ago, ending my reign as an only child and giving me a wonderful companion through the often horrifying, bizarre and occasionally darkly humorous passage of our childhood and beyond. 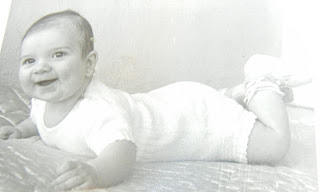 He was a sunny, cuddly, joyous baby. Aunt Molly used to joke that he had the face of an Irish politician.  Our mother adored him. I called him "My Precious Baby Brother" (after a brief period of confusion when I told my nursery school teacher that I had a new sister named Michelle). And when he could barely talk, he gave me a special name "TaTa" and his face shone when he said it. But our father, who had longed for a son, inexplicably rejected and abused him almost from the beginning.

But that didn't cloud Mike's loving nature as a child.  One particularly poignant memory stands out. One day, when Mike was about three, our father struck him hard, more or less in passing as he walked out the door to go to work. Mike, who had fallen from the blow, got up immediately and ran after Father, his arms outstretched. "Father!" he cried, reaching out to him. "Father! Wait!"

Father spun around, impatient and angry. "What???"

Mike raised his arms, tears streaking his cheeks and cried: "You forgot to kiss me goodbye."

His yearning face melted even Father's heart for a moment and he bent down to kiss him. Mike wrapped his arms around our father's neck and kissed him back. The look on his face was pure bliss. He never lost his heartbreaking hope for love and acceptance from our father. 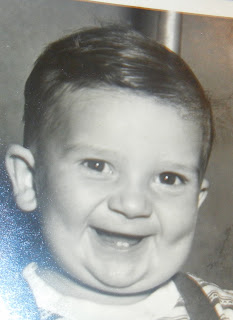 But the abuse continued. One night, when Mike and I were talking and giggling after lights out, Father came in with a threat: "If you don't stop talking in here, I'm going to give Michael a shot that will make him sleep forever. He will die!"

Frightened, we conferred in whispers, wondering if he could possibly be serious.

In an instant, Father came raging into our bedroom with a hypodermic needle, plunging it into Michael's arm and screaming at me "Well, you couldn't shut up, could you? Now Michael is going to die and it will be all your fault!"

I took Mike in my arms and cuddled him tearfully, telling him over and over how sorry I was. We sat up all night sobbing and waiting for him to die. When dawn came and he was still alive, we got dressed and went to school. Once there, Mike was unusually jittery and upset. Sister Rita, his first grade teacher, noticed. Despite being only 23, a fairly recent arrival from Ireland and having 61 first graders in her class, she noticed. She summoned me from my fourth grade classroom for a conference. "What's going on at your home?" she asked quietly. "What's the matter?"

My face crumbled and I slid into her arms, telling her the story of the night before. She checked Michael's arm and found the needle mark. She looked for other marks and bruises on both of us. With angry tears in her eyes, she embraced and rocked both of us, whispering words of love and bits of prayer in her soft Irish brogue. Some years later, our mother told me that Sister Rita had phoned her that day, asking how she could allow this sort of abuse to happen, and threatening to call the police if she ever found another mark on Mike.

The abuse abated temporarily until our parents transferred Mike to the local public school for second grade. Then it continued -- and he continued to be a distracted, jittery student who was so focused on survival that studies went by the wayside. 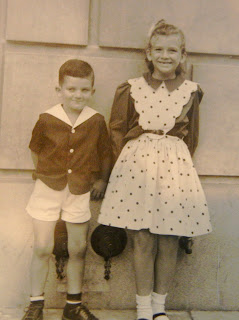 Through our childhood, Mike and I (joined later by our much younger sister Tai) were co-conspirators, trying to inject fun and laughter into a childhood that was fairly grim unless Aunt Molly happened to be around. We tried to create safety in our bond with each other to combat the terrors of life with a mentally ill, alcoholic and prescription drug-abusing father and a terrified, sometimes child-like mother.

But companionship wasn't enough when Mike was singled out for ridicule and abuse. Father said he was worthless, that he would never amount to anything. Mother kept insisting that she knew he was bright and that he did have potential. His early school record was undistinguished. He couldn't sit still to complete a test. His elementary school teachers doubted that he could read. When it came time to plan for high school, an educational counselor tested him and declared him "not college material" and recommended that he be tracked into a manual arts high school to train for a trade. He was signed up for offset printing. 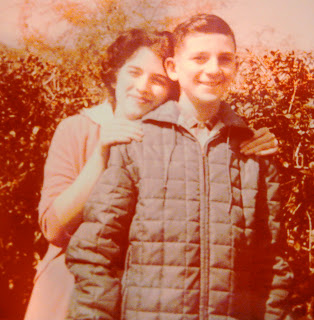 Mike and me as teenagers before he moved to Kansas

But fate intervened. After a beating so severe that he was unconscious for a time, our mother called her recently widowed mother in Kansas. Grandma needed help on the farm. Michael needed a loving and supportive home.  The arrangement worked wonderfully for both. With our grandmother's firm guidance and unconditional love, Mike began to shine. Suddenly, he was an "A" student, excelling in high school and at Kansas State as a math and physics major.

Mike graduated from college with highest honors and a horrendously low number in the draft lottery. He became an Air Force fighter pilot, flying F-4 Phantom jets in combat over North Vietnam.  Somewhere in the air over Hanoi, he made a promise to himself that if he survived, he would make a positive contribution to the lives of others.

That promise eventually took him to medical school at Stanford, where, using his computer skills and his natural frugality, he got through on his own, debt-free.  Our parents did not live to see him graduate at the top of his class as an M.D. or to see him treat patients, develop a specialty in medical informatics and to become CIO at UCLA Medical Center.

But through all the years of achievements, his heart was a world away. He had fallen in love with Thailand -- the people, the language and the land -- when he was stationed there during his years of combat in Vietnam. Many years later, after retiring from UCLA and becoming CIO of Bumrungrad International Medical Center in Bangkok, he met and fell in love with Jinjuta, whose nickname is Amp.  They were married in July, 2007. 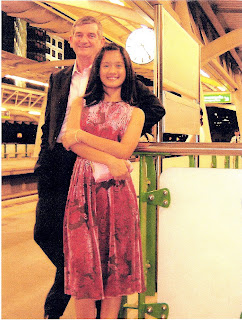 Still scarred by childhood pain and by our father's admonitions "Enjoy women, but if they start to talk marriage, disappear like the morning mist!" and "Marriage and children are the complete life catastrophe. A wife and children absolutely ruin a man's life", Mike had avoided commitment to some wonderful women over the years. But Amp was different. With her keen intelligence, her gentle nature and her frugality -- even more pronounced than his own -- she touched his heart more than anyone else ever had.  Despite their age and cultural differences, they were simply meant to be together. 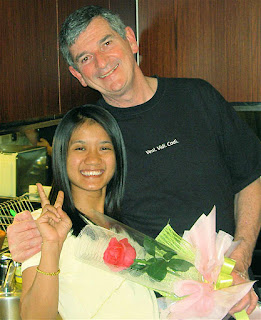 Mike and Amp - Every day a celebration!

After he accepted research and teaching positions at both Harvard Medical School and USC, Mike returned to the U.S. with Amp and, in 2009, they were blessed with a daughter they named Grace Elizabeth, nicknamed Maggie.

And he is finding that marriage and parenthood is not a catastrophe but an incredible joy, that the pains of childhood can be stilled by the presence of true love and the unabated joy and laughter of his own child who is growing up knowing only love and kindness and the warmth of extended family as they split their time between their homes in Los Angeles and Bangkok. 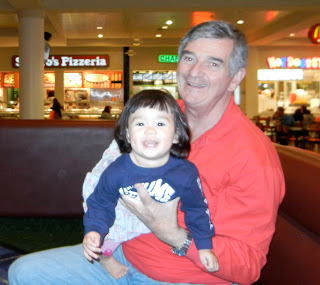 Mike and daughter Maggie in a playful moment

Amp and Maggie are the greatest gifts of his life, bringing him happiness, a sense of security and a love he never thought possible. Mike has enjoyed a myriad of accomplishments in his adult life -- his awards as a pilot, and international recognition as a physician, and as a pioneer in medical informatics. These professional achievements have helped to silence those hurtful pronouncements from our father that Mike was a worthless, hopeless human being. But he has achieved so much more within his accomplishments. He has been a physician who cares deeply about patients. As an administrator, he has always made the people who have worked for him a top priority. Wanda Hardin, his long-time assistant at UCLA Medical Center, recently wrote to me that "Dr. McCoy is the kindest person I have ever met. For the rest of my life,  I will love and respect him and be so glad to have worked for him."

Beyond all these achievements, however,  the life event, the accomplishment, that matters most to Mike is the blessing of his own family that is a world apart in so many ways from his family of origin. 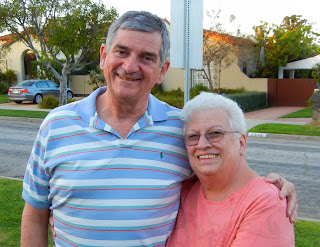 And yet, he reaches out warmly to me, and to Tai, and welcomes us into his life. He is generous with praise of our accomplishments, of our talents and is supportive of our dreams. All the hardship of his early life could not destroy the loving, sweet spirit of that little boy so quick to hug, to forgive, and to reach out with love. 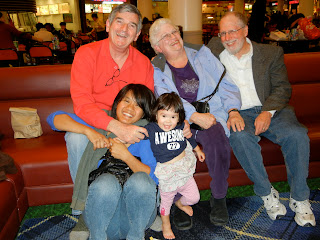 So Happy Birthday, my Precious Baby Brother, and may you have many more! With love, TaTa.
Posted by Dr. Kathy McCoy at 12:02 AM