I've always had a soft spot for black cats. When I was a child, we got our first cat -- a black Angora kitten we named Edie. Edie was a joy to all of us, but had a special love for my sister Tai, only a toddler at the time. Edie would wrap her paws around Tai's neck and hug her. She hugged Tai through some very tough times -- and losing her, when Tai was 14 -- was devastating. Tai and I have both had other cats through the years, all of them special, but our memories of Edie are everlastingly warm.

More recently, my husband Bob and I have treasured our own two black cats: Maggie and Ollie.

Maggie came to us during a time of sorrow. We had lost our beloved Timmy -- one of a bonded pair of brothers -- due to melamine poisoning during the pet food scandal in 2007. Timmy's brother Gus cried all night, every night, for three weeks until our vet suggested getting him a kitten to love and take care of. That kitten was Maggie and Gus loved her at first sight. 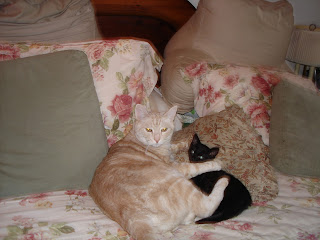 Bob felt a special bond, too. Maggie was a sleek, shiny Bombay, a black Burmese who had been dumped into rescue by a Beverly Hills breeder because she was such a homely kitten. She grew into a beautiful cat: loving, smart, kind and protective of Bob. When he would have epileptic seizures or night terrors, she would jump on his chest and put her paws around his neck. Once, when he had a seizure so severe that I called 911, she stayed on his chest, hanging on tight when the paramedics arrived even though she usually rushed to get under the bed when strangers would arrive at the door. Maggie was sweet to me and always seemed mindful that I needed love, too. But Bob was her most special human. 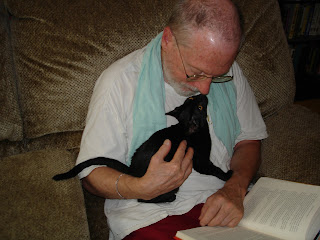 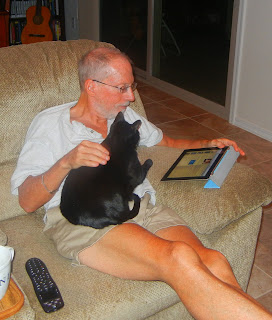 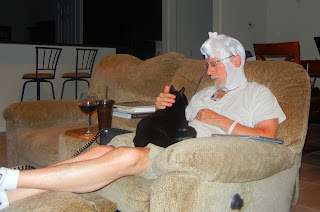 Ollie came to us seven years after Maggie -- a fortunate accident. I was in the L.A. area to promote my book "Purr Therapy" which was about the two cats -- Timmy and Marina --who had worked with me one day a week doing animal assisted therapy in my private practice. At one event -- Catoberfest in Santa Clarita -- there were rescue organizations offering animals for adoption. Taking a break from book signing, I walked outside and then I saw him. He was the poster kitten for unadoptable animals who needed financial support to keep living in rescue. His name at the time was "Herbie the Love Bug" and he was two months old, all soft black fur with a daunting past. He had been mutilated shortly after birth -- his right hind leg mostly severed. He also had a giant hernia. The newborn kitten had been thrown into a trash at the curb but was saved by his big voice -- a resounding yodel that never ceased to startle us -- that alerted a passerby who took him out of the trash and to rescue. He needed some expensive surgeries and was considered a long shot for adoption. I sent my husband a picture of him and Bob replied "Let's take him! Let's give him a good life!" 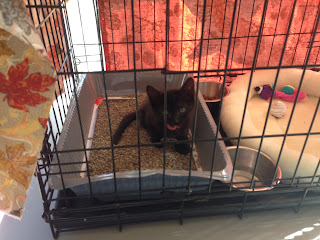 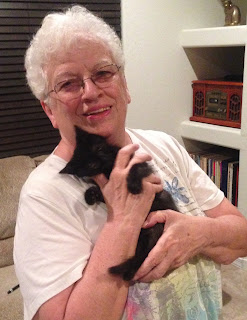 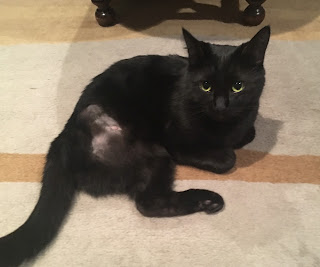 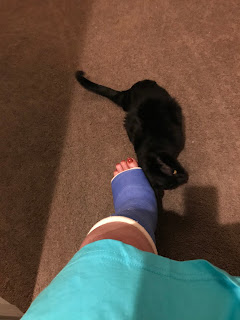 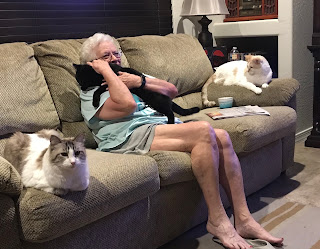 We were able to keep that promise. Renamed Ollie, the little kitten survived three surgeries and never had another sick day. The most major of his surgeries involved the removal of the stump of his leg and his right hip. He was chasing lasers again three days after surgery. He could run like the wind on his three legs and jump as high as any of his feline companions. He loved to be cuddled, would come when called, purring as he jumped up to snuggle. He rushed to comfort me when my left foot was crushed in an accident in 2020, rubbing the casted foot and purring. He often was so busy saying a joyous "hello" that he was late to meals. He not only lived a good life, but also made ours better because he was with us. Someone's trash was truly our treasure.

There were times when we would look over at each other -- Bob cuddling Maggie, me cuddling Ollie -- and tell each other that black cats were magical and wonderful and that life was good.

Life is good, but also fragile.

Maggie's health began to decline rapidly just as she was about to turn 14. She lost a significant amount of weight, suddenly looking skeletal. Always a very proper, well-behaved cat, she began to defecate outside the cat box. We cleaned up after her. We gave her special medication for her thyroid condition. And tried to love her back to good health. But love was not enough to keep her with us...and Maggie passed away in February 2022 just weeks shy of her 15th birthday.

There hasn't been a day that has passed without missing her. Our one consolation has been that our other cats have been healthy and are younger: Sweet Pea is 12, Hamish, 10 and Ollie, 7. I imagined enjoying Ollie's cuddles for many years to come and thought that he would most likely be the last of our surviving three to pass away.

Life can be surprising, strange and cruel.

I spent much of yesterday in bed, suffering flu-like side-effects after getting my second Covid booster shot. Ollie and his best buddy Hamish cuddled with me much of that time. I got up to feed them about 5 p.m. last night, noting that all three cats were eating their dinner enthusiastically. I returned to bed and fell asleep. When I woke up several hours later, I saw Ollie lying across the threshold of the bedroom door. I called to him, expecting his usual response: to make a running jump onto the bed and into my arms. But he was still. I moved closer. I spoke his name. I petted him and cupped his head in my hands. His neck was limp. His pupils were dilated. He wasn't breathing. Ollie was gone.

We were totally shocked. He hadn't shown any signs of illness or distress. He had had an ordinary day and a hearty dinner. Bob held him tenderly in his arms, telling him how much we loved him and what a wonderful cat he was. Part of this was saying "goodbye" but part was disbelief. How could he be so suddenly, inexplicably gone? Once again, we were quietly hoping love would overcome the inevitable. We checked and re-checked, hoping against hope that this was all a mistake, a misunderstanding, a bad dream. But he lay still in Bob's arms.

And so, in an instant, another magical black cat has become a memory. But, oh, what memories! And how blessed we were to have these two unforgettable black cats in our lives. 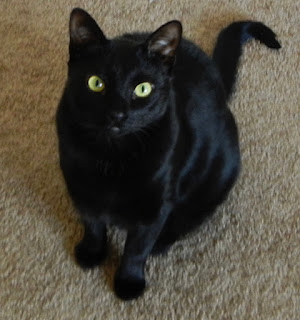 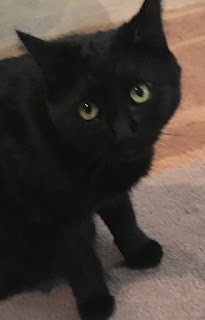