10 Surprising Facts About Why Parents and Adult Children Become Estranged

Being estranged from a beloved adult child can bring feelings of loneliness and terrible isolation. You watch others enjoy close relationships with grown children and grandchildren and wonder what went wrong and why? And you feel so alone.

But you're not alone.

When I wrote the post "When Parents and Adult Children Become Strangers" back in 2012, I had no idea that it would become day after day, year after year, my most popular, most read, blog post ever with hundreds of heart-breaking comments and observations from both parents and adult children.

This response made me want to learn more about this sad phenomenon -- and after some years, many interviews and lots of research, I wrote We Don't Talk Anymore: Healing After Parents and Their Adult Children Become Estranged (Sourcebooks, 2017).

In researching the book, I discovered some surprising facts about parent and adult child estrangement that I'd like to share with you.

2. Fathers are more likely to become estranged from their adult children as the result of divorce, either in the distant past or via a recent "Gray Divorce." Resentment over a long-ago divorce and alienation fueled by parental anger can cause an emotional split that endures into adulthood. A gray divorce between long-married parents can spark conflicts with adult children who feel compelled to take sides or who resent the changes this brings to their own lives. A study of late-life divorce and its impact on relationships between the divorcing parents and adult children found that while fathers are more likely to experience a decline in contact with adult children, the divorced mothers were more likely than married mothers to report an increase in weekly contact with adult children. Newly divorced fathers may find it difficult to talk about their feelings with anyone. And they are likely to remarry more quickly and in greater numbers than mothers. A late-life parental remarriage can be as disruptive to father-adult child relationships as the original divorce.

3. Mothers are more likely to become estranged as the result of continuing demands for closeness or giving unsolicited advice. This kind of estrangement can come from conflicting needs and perceptions about how much contact is too much, what advice can feel like criticism (particularly in the area of child rearing) and what actions can feel intrusive. The mother may feel she's just being helpful. The adult child may have a very different view.

4. An adult child who is at odds with a mother's core values is more likely to become estranged than an adult child who is arrested or involved in substance abuse.  Strange but true! In a study of mothers headed by Dr. Megan Gilligan of Iowa State University, researchers found that clashing values -- such as differences over religion or partner choice -- were major factors in estrangement between mothers and their adult children. The study found that many of the estranged mothers were, on the other hand, quite tolerant of other adult children showing socially deviant behavior. One mother, for example, was estranged from a son who had divorced and remarried, life choices at odds with his mother's Catholic faith, while her two other children with histories of substance abuse, DUI arrests and, in the case of her other son, a myriad of run-ins with the law, remained close to her. In fact, she talked of her often-jailed second son with pride -- "He is my success story!" -- because he was still in his first marriage.

5. Estrangements are more likely to come from a conflict of needs rather than verbal sparring.
This divisive conflict is often the need of the adult child to be independent and in control of his or her own life and the need of the parent to remain closely connected and, ultimately, in control. When tensions rise, the adult child may seek autonomy by becoming estranged from parents. Researchers have uncovered a sobering fact: parents are more emotionally invested in their relationships with their children than their children are with them. This is called the "developmental stake hypothesis" and is consistent across the lifespan. This is important for parents to understand and take steps to safeguard their ties with their grown children by respecting their autonomy and, in the case of conflict, being the first to apologize.

6. Some emotional distance can improve parent-adult child relationships and make estrangement less likely to happen.  The paradox of an intimate yet distant parent and adult child relationship has been pinpointed in several studies, most notably in research by K.L. Fingerman of Pennsylvania State University. She found that parents and adult children who reported close ties still had some psychological distance. She noted that parents tended to stop trying to direct their children's lives and their grown children, in turn, sought to protect their parents from worry, often by not discussing some problems with them. She noted that this distance tended to improve the relationship and could serve as a bridge to a different kind of intimacy.

8. An estrangement isn't just between a parent and an adult child.  Estrangements can impact the whole family. We see this in therapy all the time, especially with siblings, grandparents, aunts and uncles who get dragged (or insert themselves) into family conflicts, bringing up many feelings, old conflicts and rivalries from the past and complicating the situation in the present.

9. Having a good relationship in your child's growing up years is no guarantee that you'll never be estranged.  Many now-estranged parents lament that they once had close and loving relationships with their children. Sometimes this later-on estrangement can come from changes in the family -- like a late in life divorce -- or from a reluctance to change -- such as parents who insist on being more involved and controlling of a grown child's life than the adult child can tolerate. And sometimes the later estrangement can come from a developing problem with substance abuse or mental illness. This is particularly common with personality disorders such as borderline personality disorder or narcissistic personality disorder, both of which may first become evident in late adolescence or early adulthood.

There are many variations of the heart-breaking stories of estranged parents and adult children. Understanding your own narrative -- the reasons, the solutions and what to do if nothing seems to be healing your relationship -- takes time, insight, a willingness to open your mind to another's point of view and to new possibilities in your life. Sometimes it can mean seeking professional help to sort out your feelings.

If you're curious to know more about reasons for estrangement, ways to begin to reconnect, and strategies for healing your heart -- whether or not a reconciliation ever happens --you might want to read my book We Don't Talk Anymore: Healing After Parents and Their Adult Children Become Estranged. It is available in bookstores nationwide and, of course, as a print book and an e-book on Amazon.com and BarnesandNoble.com. You can find direct links to these online sites by going to my website www.drkathymccoy.com and clicking on the book title.

And, remember, this book was inspired by those of you who have been reading and commenting on this blog for years! 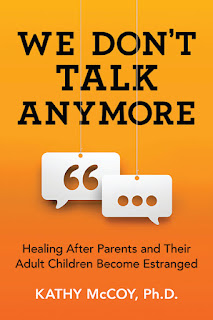