The Challenge and Joy of Seeing Each Other Every, Every Minute

There is a poignant, memorable moment in Thorton Wilder's "Our Town",  when the recently deceased Emily is given a chance to relive her 12th birthday and travels back in spirit, unseen and unheard by her family. Instead of joy, there is anguish as she watches family members treating each other so casually, not really looking at each other, unaware of the toll that time would take.

This lesson resonated for me in a new way last week when I flew to Chicago to attend and participate in the Celebration of Life for my friend and former Northwestern classmate Maria Kulczycky.

When we were young, I saw Maria every school day for our five years as undergraduate, then graduate, magazine majors at Northwestern's Medill School of Journalism. I saw her as an awesome mix of intelligence, fierce ambition, amazing strength, assertiveness and confidence combined with intriguing earthiness and European elegance.  I admired her, resented her and envied her as we competed relentlessly with each other on a daily basis -- in the classroom and in our shared affection for a certain male classmate Tim Schellhardt. Tim was blissfully unaware of the silent psychodrama swirling around him. He simply considered the two of us good friends and eventually resolved our situation by falling in love with and marrying someone else entirely while maintaining lifelong friendships with both Maria and me.

There were times in our years as classmates when I caught a glimpse of Maria's capacity to care, even if it meant doing or saying something hard -- like the time, sitting across a lunch table from me during our graduate year, she forced me to face the truth about something I hadn't wanted to imagine. In my feigned nonchalance, followed by tears, I was blinded by anger and embarrassment to the genuine caring in her eyes, though in memory, I see that flicker...

While Maria and I did not keep in touch for many years after graduation, our mutual friend Tim kept us posted on each other. I found myself rejoicing, in time, over Maria's success as a financial journalist, over the happiness she found in her marriage to Lamar Brantley, over her love for his three children by his previous marriage and over her joy when they were blessed with their daughter Nina, who grew up to be accomplished, adventurous and lovely, very much in the spirit of her mother. And so many times over the years, I wished we had been friends. We should have been friends. I had always felt a strong bond with her, given our shared ambitions and interests. But I never reached out to her until the year before our 50th college reunion.

Two things happened to make me reach out: the alumni office at Northwestern sent me a list of classmates to contact for the reunion and I was thrilled to see Maria's name and email address on that list. And looking through my small box of college mementos, I found a photograph that took me back years. It was a picture I had taken on assignment for my photography class, one I had churlishly discarded into my outtake file, somehow the only photo file that survived through the years. I had been taking a picture of Tim walking on campus when, suddenly, out of nowhere, Maria ran up and linked her arm in his just as the shutter clicked.  But now, more than 50 years later, I took a picture of the picture and sent the digital copy, along with an email, to Maria.


She responded immediately and warmly and it was the beginning of our year long heartfelt correspondence leading up to the reunion. And in this year of building a friendship -- one that should have happened half a century before -- I began to see Maria in a new way: I saw her tenderness, her kindness, her emotional generosity. And I came to treasure her as a new old friend.

She changed travel plans in order to attend the reunion, where we fell into each other's arms in front of our smiling, if somewhat surprised, friend Tim. The three of us spent a glorious day together -- talking, laughing, delighting in each other's stories, lingering over a three hour lunch. It was then that I heard the details of Maria's back story. She had been born in the Ukraine in the waning days of World War II and her family then fled to a refugee camp in postwar Germany where they spent the next seven years, where her sister Daria was born and where the family's lifelong friendships with other refugees were formed before they all started their new lives in Chicago's Ukrainian community. Hearing about her early life, I understood, with new clarity, why she was so strong, so assertive, so fiercely ambitious at such a young age. She had to be.


When Maria was leaving the reunion at the end of the day, she kissed both Tim and me and hugged us tightly for a long time. I marveled at her warmth and her joy in sharing the day with us. Turning to Tim after she left, I said with wonder -- as if this were something quite new -- "Maria's such a wonderful person."

Tim look surprised for a moment, then smiled. "She always was," he said quietly.

We had no way of knowing that we had just said "Goodbye" to Maria in person for the last time, though many months of delighted emails would follow as she rejoiced in our good news and shared her own -- a wonderful trip with her husband to Patagonia and, a month later, her "best birthday ever!" and finally, an eagerly anticipated trip to Phoenix in May to see Lamar's youngest grandchild graduate from high school that would also bring a chance for us to get together again. They canceled the trip at the last minute because Maria was experiencing bouts of vertigo. She told me that it was probably nothing and that we would have our visit -- perhaps when Arizona cooled down a bit in the fall.

But that was not to be. Three weeks after our last email exchange, only eight months after our joyous 50th reunion, cancer claimed Maria's life. She had battled it, off and on, for some years -- something she had never told us because she didn't want to be defined by her disease or to be seen as an invalid when she was so very much alive, right up to the end.

And she came gloriously alive for us once more at her Celebration of Life on August 26 in Chicago. Tim and I attended and, at Lamar's request, we both spoke of our college experiences with Maria.

But we both quickly understood that our perspective was limited and that this celebration was a wonderful chance to see and know Maria with new clarity...

...Through the eyes of her beloved husband Lamar, who started his tribute with "Maria wasn't everyone's cup of tea..." but made it clear that she was the love of his life. 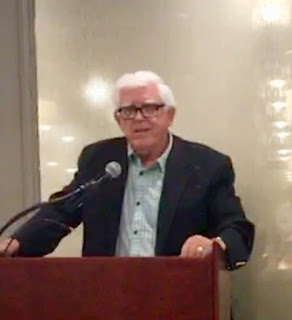 ....Through the eyes of her daughter Nina who remembered her love, her sense of adventure and her quiet courage and who is living these splendid qualities of her mother's in her own amazing life. 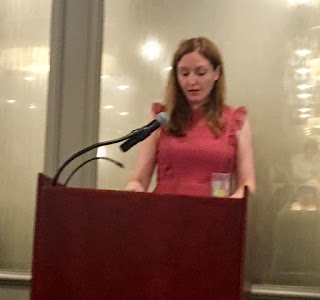 ....Through the eyes of her sister Daria who asked us to imagine what it must have been like to be the younger sister of this true force of nature, but who sadly noted in ending that she had missed having Maria there to tell her exactly what to wear for this occasion. 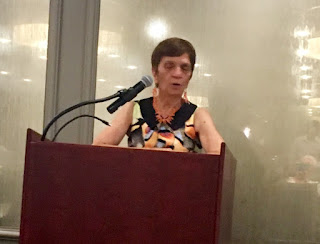 ...Through the eyes of Nicholas, the grandson from Arizona, who expressed his love and gratitude for Maria, remembering how she always accepted and embraced him and took him to his first Gay Pride parade shortly after he came out to the family.

....Through the eyes of friends who had known her forever, since their days in the refugee camp in Germany and through decades of multigenerational friendships since, as their families became each other's extended families and who could look back in time to see her in her Chicago childhood as a Ukrainian Scout, then as a scout leader and a mentor to other young women growing up in Chicago's Ukrainian community. She never forgot where she came from and gave back, in so many ways, to those who came after her, time and time again.

We tend to see others through the prism of our own experiences with them. What a revelation and a blessing it is to get a chance to see someone we loved and thought we knew well through other, more knowing eyes. It was a special privilege to see Maria through the memories of those she loved most -- and to realize, with wonder, how much more there was to know and admire and love.

My brother Michael, who lives in Bangkok, Thailand, wrote a warm email in response to my glowing account of Maria's Celebration of Life: "I'm so glad that you were finally able to really see Maria after all these years before it was too late....in the way that Emily in 'Our Town' wished her family could stop and see each with time going by so fast."

Yes. It was a joy to see past those early rivalries to glimpse the inimitable Maria and to know her even better as I listened to the stories of those who knew and loved her best.

I looked at Tim and saw, at once, the lovable young classmate and the loving grandfather, and, consistent through the decades, his brilliance and talent, his warmth, his unique sense of humor, his goodness, his kindness, his generosity of spirit. I smiled as I saw him in all his familiarity and complexity and his innate talent for being, at once, dignified and wonderfully funny.

"I love you, dearest friend, unconditionally and forever."

And we embraced, united in our celebration of Maria, and of the time, the years, we've been blessed to share as very special friends -- suddenly cherishing every, every minute.