Saying Goodbye to Someone Special

"This isn't an easy time of life, is it?" wrote my friend Roxanne Camron, former editor of 'TEEN Magazine, where we worked together for nearly a decade in our youth. She was writing in the wake of two recent deaths -- that of our 'TEEN colleague Jay Cole, so eternally active and youthful until his recent medical decline, who had died three weeks ago and that of my former long-time literary agent Susan Ann Protter, a genuine force of nature, who passed away on April 26.

No, it isn't an easy time. It's hard enough to say "Goodbye" to our parents, aunts, uncles and older friends. But there is something particularly poignant about the loss of a peer -- something that is happening with increasing frequency these days. And there are times when the death of a special peer takes not only a beloved friend but also a piece of one's own history.


That's very much the case with the death of Susan Ann Protter. She was my literary agent for more than 30 years and, not so incidentally, a dear friend with an amazing array of talents, strengths, quirks and eccentricities that made time with her so special -- and for great stories as well. All of her friends and clients had tales of her fits over the small stuff (a bad hair day, a botched manicure that, as one friend said recently, "could send her into a tizzy"). But there was so much more. She could be blunt with her feedback on proposals and manuscripts, a trait I came to appreciate greatly. She was tender in her support of a client in crisis and fierce in her defense of a client and/or treasured friend. There were times, over the decades, when we had impassioned differences -- to the extent that I left her agency twice for brief periods only to return to a warm welcome each time. Susan's clients were like family to her. With the passage of time and with greater wisdom, I realized that whenever we disagreed, Susan was almost always right. And she had the grace never to say "I told you so!"

Our history together dates back to late 1976. I was a young editor at 'TEEN Magazine, eager to break into writing books. I had been asked by a New York psychologist/author, whom I had met the year before while he was in L.A. promoting a book he had done with another writer, to be his co-author on a book of advice for teenagers. Our long-distance work with each other on the book proposal was fraught. We didn't agree on some core issues and made some uneasy compromises in our proposal. And he kept losing literary agents, about one a month, but kept writing me letters putting a positive spin on it, insisting that THIS new agent would be the one to make our proposed book a big hit. The sixth agent in as many months was someone I had never heard of: Susan Ann Protter. I was outraged. I sat down and wrote the psychologist an angry letter telling him how tired I was of the high agent turnover, how I wanted this agent's feedback on our proposal and wanted more information on her professional credentials. He had the presence of mind to show this letter, meant for his eyes only, to Susan.

She called me immediately. I asked what she thought of our proposal.

"Your proposal?" she bellowed. "It sucks! Bury it! Burn it! And while you're at it, forget about this partnership. The good doctor is bad news. Would you believe that he offered to get me dates with five eligible New York bachelors if I sold your proposal? So insulting! I was ready to wash my hands of both of you, but he just brought me your angry letter and it's a revelation: you really CAN write! So do you have any ideas for another book, either alone or with someone else?"

Actually, I did. But it wasn't as easy as just saying "Yes!"

For several years, Dr. Charles Wibbelsman, 'TEEN's "Dear Doctor" columnist (as well as a pediatrician with a specialty in adolescent medicine), and I had talked about collaborating on a health and sexuality book for teens. We envisioned a kind of adolescent "Our Bodies Ourselves." But now there was a problem. In the course of our work together at 'TEEN, Chuck and I had fallen in love. We had talked of marriage, a family and a lifetime of writing books together. Then, at age thirty, he came to the painful conclusion that he was gay. He had met a special man and they moved to San Francisco to begin a new life together. Our parting had been devastating for me, heart-breaking and tempestuous for both of us. We were barely speaking at that point. Yet here was a chance to make at least one of our shared dreams come true. I called him.

We wrote the proposal within a few weeks and sent it to Susan. She took it directly to Simon and Schuster/Pocket Books where it sold immediately. We had a year to write it. It wasn't an easy year for either of us or for Bob Stover, the book's illustrator, whom I married during that memorable time. But the result was "The Teenage Body Book",  an award-winning, critically acclaimed best seller when it came out in 1979. It has been continuously in print with seven U.S. editions, the latest in 2016, and five foreign editions. It established my career as an author, gave a boost to Chuck's career as a medical expert on adolescents, rescued our loving friendship and started us on our journey of hard work, friendship and laughter through the years with our agent Susan. Chuck and I wrote three other books together as well as the seven editions of "The Teenage Body Book." I also wrote a number of books on my own. And Susan was a huge part of all of that history.

She visited us in California. We saw her often in New York. She offered me a place to stay at her apartment on Central Park West when, in the early days, I would come to New York to meet with magazine editors for assignments and publishers to discuss new book projects. We would talk for hours into the night in those years and I loved getting to know her history. She was the only child of devoted but unusual parents. They had been committed Communists when Susan was growing up. Her father was a highly successful labor lawyer, her mother a political activist. She sometimes bemoaned growing up in a house filled with secrets due to her parents' political leanings, but she treasured who they were. And they loved her unconditionally -- in all her outrageousness.

Once, I joined Susan and her parents at the parents' home in Long Island for a Passover dinner. As was her wont, Susan criticized everything about the food -- from the brisket to the gefilte fish. Her mother rolled her eyes and turned to her father. "Ah, Marcy," she said. "How did we spawn this...?" And all three threw back their heads and brayed with laughter. It was a wonderful evening.

Political activism was in Susan's blood and she honored that to the end -- attending a student-led demonstration against guns a little over a month before her death. She was in a wheelchair and with her live-in medical aide, but she was there. She was fully engaged with her life passions -- from opera and classical music to travel and sampling exotic cuisines -- to the end of her life, attending a New York Philharmonic performance only a few days before her death. She had majored in French at Syracuse, earning a Master's degree and teaching briefly before heading into a career in publishing. She was one of the first independent agents in New York and it was the perfect niche for her. She was a terrific agent: nurturing, assertive, and fearless.

I always admired her singular courage -- so evident in her traveling to Cuba through Canada back in the day or taking on a problematic publisher. Friends observed that while she was the queen of kvetching about the small stuff -- from tables at restaurants (she would change tables 3 or 4 times typically) to food (which she always always sent back) to small annoyances, she was incredibly brave as she faced her snowballing health problems during the last decade of her life. She had a rare blood cancer, cardiac issues and back problems requiring many surgeries and grueling medical procedures. By 2011, ill health forced her into retirement and she closed her agency. That same year, she visited Bob and me at our new home in Arizona when she came to the Mayo Clinic in Scottsdale for consultations about her blood cancer.


A few years later, she had a stroke that left her legally blind. She had increasing trouble walking and was confined to a wheelchair during the past few years. I never admired Susan's courage more than I did during this time of declining health. She was always amazingly nonchalant about the big challenges in her life and lived with gusto through all of it, even while continuing to complain only about the small stuff.

I talked with her on the phone regularly, but the last time I saw her was in June 2015. I was in New York for a speaking engagement and to meet with my wonderful new agent, Stephany Evans, to whom Susan had introduced me. Chuck joined me in New York just for fun, in celebration of my 70th birthday. He bought tickets for us to several Broadway shows I had been eager to see. He arranged for Susan to join us for dinner one of those nights and to go with us to see "Fun Home." The three of us had a wonderful time that night -- talking, arguing, kvetching, laughing. For old times sake, I teased her about her distinctive New York accent, imitating some of its more salient features, and she did the same with my California accent. We reveled in our silliness. And we talked seriously of new realities. Susan was frail. She was legally blind and carried a white, red-tipped cane. She was close to needing a wheelchair and leaned heavily on both of us for support as we walked to the theater. But she was as fun, outspoken and exuberant as ever. Chuck and I both treasure the memory of that lovely summer evening.

We reminisced about that evening and about our long history with Susan on the phone yesterday as we consoled each other. "Susan was such a bright, sophisticated, cosmopolitan lady who always told it like it was," he said. "I will miss her so much -- that deep chortle of hers, that great New York accent -- just...her. There was such caring...a special kind of love..."

We talked of our gratitude for and to Susan -- for her role in making our books possible, for giving boosts to both our careers, for her caring friendship, for her part in bringing us back together, out of heartbreak and into a loving, lifelong friendship.

Chuck sighed. "This is the end of another chapter of our lives," he said at last. "And it's a reminder to live our lives as fully and joyously as Susan did, every day we have left...."

Susan Ann Protter was so much more than a terrific agent or even a dear friend: she was a vital part of our shared history -- and of our hearts. 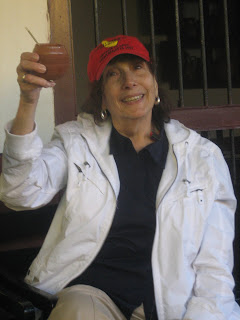