Alarming Headlines and a Story Behind the Headlines

AS JERKY TREATS KILL OUR PETS, FDA ASKS FOR HELP

The story is this: Pet jerky treats, coming mostly from China, have sickened 3,600 dogs and cats in recent years. A documented 580 dogs and 10 cats have died as a result of eating these treats which can cause kidney failure, gastrointestinal bleeding and a rare kidney disorder, according to the Food and Drug Administration.  The agency is now appealing to pet owners and veterinarians to send them information on animals who may have become sick after eating the treats. A pet may have  suffered from decreased appetite, fatigue, vomiting and diarrhea after ingesting the jerky treats sold under a number of brands as jerky tenders or strips made of chicken, duck, sweet potatoes or dried fruit. So far, FDA officials have not been able to identify the ingredient causing sickness and death in too many beloved pets.

Before you turn the newspaper page, skimming the contents, stop and consider the stories behind those statistics. What if the unimaginable happened to your beloved dog or cat?

I remember when the first headlines appeared heralding another pet food alarm in 2007. During that scare, the ingredient was identified: in a wheat/protein filler, manufactured in China and used in dozens of U.S. manufactured pet food brands, the plastic substance melamine was substituted for higher-cost natural ingredients. Thousands of dogs and cats were affected -- with many thousands ill and hundreds dying. The FDA set up a section of their website listing popular pet food brands that had been found to have this lethal melamine ingredient. Alarmed, I went online to the fda.gov site and checked the pet food brands recalled. I breathed a sigh of relief. The brands we were feeding our nearly 9-year-old feline duo did not appear on the site. Timmy and Gus were safe.

Thank goodness! These two brothers, adopted from our vet after she had spent a month nursing the 3-week-old abandoned kittens to good health, came as a mandatory pair. They were so bonded, she said. They should not be split up. So we took them both, loving and enjoying them so much, we could hardly wait to get home from work each night. 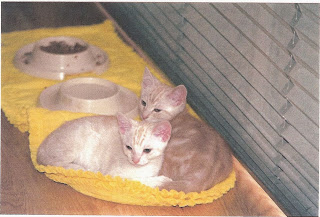 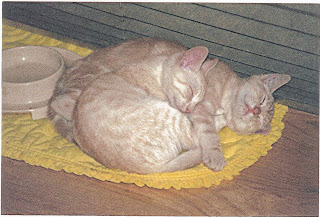 Loving brothers sleeping curled up together

These two brothers were quite different -- different personalties, liking different types of food -- and yet they were warmly bonded with us and with each other. Gus is a love, a sweet, cuddly cat. Timmy, a bit more complicated, still loved to cuddle and talk incessently and ride on Bob's shoulder. He was so outgoing and affectionate that he worked as an occasional therapy animal in my private psychotherapy practice. Timmy and Gus curled up together to sleep each night. We became a loving family of four. 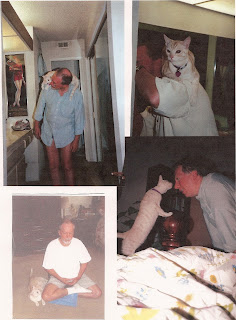 Timmy with his buddy Bob 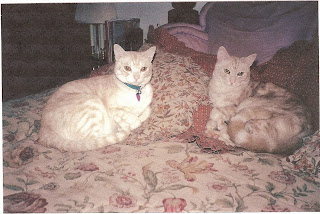 Timmy and Gus as adults

I mentioned my concern about tainted pet food and my daily website checks to an acquaintance who had a dog. "Oh, yeah," she said. "My husband did a web search and the serial numbers of the recalled food matched our dog food batch. But we bought a whole case of it. She has eaten three cans and hasn't died yet, so I guess we'll give her the rest and hope for the best. That stuff is expensive. We can't just throw it out." (Despite her thoughtlessness, her dog survived.)

I shuddered at her words and vowed to keep checking the mounting list of contaminated pet food online.

I remember lying on the bed that Mother's Day -- not my favorite day of the year -- snuggling with Timmy and Gus and thinking how much I loved them and how much I wanted to keep them safe. Timmy looked at me thoughtfully, directly, as he often did. "Please live for a long, long time," I said, feeling suddenly tearful. "I can't imagine life without you two."

That Tuesday, Bob and I returned home from work to the sounds of retching. Timmy had thrown up in three places, but seemed to perk up as the evening went on. Gus was fine. I checked the website again. The foods we gave Timmy and the food we gave Gus were not on the list. A virus, we guessed. We'd keep an eye on him and call the vet if he vomited again.

Wednesday we got home to find that Timmy had vomited in five different places throughout the house. As he began to vomit again, the retching came between piercing screams. We rushed to embrace him and tried to find help. His vet's office was closed for the night. We took him to an emergency services vet who found nothing of note wrong with him except that he was a little dehydrated. She suggested giving him plenty of water and taking him to his regular vet first thing in the morning. When we got home, I went online, checking both the government website (still no mention of Timmy's food) and vomiting as a symptom. Timmy lay on my lap, watchful and trusting. That night he insisted on sleeping with us, cuddling up for comfort, purring and rubbing his face against ours.

I met his vet as she arrived at her office at 7 Thursday morning. She said she would run some tests and that it might be a virus. Timmy had never been ill in his nearly nine years of life. She suggested that I leave him with her and pick him up that night.

Two hours later, she called me at my office at UCLA. "I can't believe it," she said, her voice choked. "He is in total kidney failure. Has he been in your garage? Could he have ingested anti-freeze?"

"No, he hasn't," I whispered, sitting down, shocked.

"He has a urinary blockage and I don't have the diagnostic equipment here to discover the cause," she said. "Could you come get him and take him to West Los Angeles Pet Hospital? I know an excellent doctor there and they have the equipment." The hospital was three blocks from my office but 35 miles from Timmy. I called Bob at his office in downtown L.A. and we raced for our cars, getting to the vet's at the same time. We bundled Timmy into his carrier and Bob drove frantically through heavy traffic to get to the hospital.  The hospital receptionist demanded $1400 in advance. The doctor smiled and cradled Timmy, remarking on how beautiful and well-behaved he was and said they would need to keep him overnight for tests.

Bad news came Friday morning: his kidney failure was complete, his blockage -- of mysterious origin -- was immobile. "We're going to try one more thing," the vet said. "But if that doesn't work, we will need to put him down."

Worse news came promptly. There was nothing that could be done to save him. He was in horrific pain. Euthanasia would spare him further agony.

It was a nightmare. Timmy brightened when he saw us, ready to go home. The vet said he had been given the maximum amount of morphine to dull his excruciating pain. Timmy raised his chin for the vet to scratch it and cuddled with us. Then he saw the needle and began running around the room, dragging the catheter behind him. Twice he wrenched the needle out of the catheter with his teeth. He hissed at the vet. He looked at us imploringly.

"Timmy, my love, come sit on my lap," Bob said quietly. Timmy obeyed. The vet attached the needle. And then he was gone. And our hearts broke, the pain indelible, even more as we listened to Gus howl in the night, every night, for his brother, until, a month later, we adopted a kitten named Maggie for him to embrace. 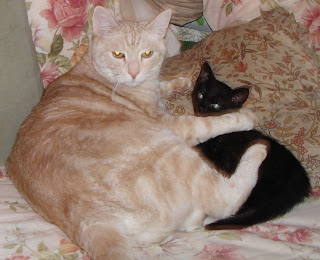 The necropsy reports were painful to read, but not a surprise: Timmy's kidneys were destroyed and his urinary system completely clogged and solidified with melamine crystals -- yes, the plastic material. Timmy was yet another victim of melamine poisoning. 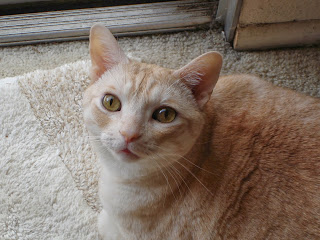 Last photo of Timmy a few weeks before death


Timmy's food appeared on the FDA list a week after his death.

There were class action suits. We joined them. The settlement would be limited to a percentage of the expenses of the last illness. No other compensation was possible because, well, pets are property according to the law. Timmy's last 24 hours had cost $4,000. We would have spent much more if there had been a hope of cure. Our final settlement amount was $1,643. It could have been
100 times that and it wouldn't have touched the magnitude of our loss.

And I look in his eyes and wish he could live for a long, long time. But I don't say it. I just take his head in my hands, tell him how much he is loved and listen to him purr. 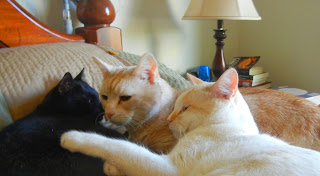 Gus in 2013 with Maggie and Hammie


And so now there is another round of tainted food, another growing number of sick and dying pets.

I no longer give our cats treats or cat food with any fillers. I'm monitoring their health closely. And I'm hoping, somehow, this new problem ingredient will be identified and removed from pet foods before many more beloved pets die.

What else can I tell you?

Please read the headlines. Go to the FDA site to keep current and report any illnesses promptly. Throw out any jerky treats. Watch your pets closely and get them to the vet at the first sign of illness.

My only wish as I read these headlines is that you and the animals you love so much will be spared the anguish that is with us still.
Posted by Dr. Kathy McCoy at 8:06 AM