The Glory of Now

My friend Theo looked thoughtful today as he and Bob tuned their guitars for a music session. "Why is it," he said. "Why is it that people are always looking for a reward -- the glory of heaven, the big cash out, public accolades -- instead of living, just living, fully now?" 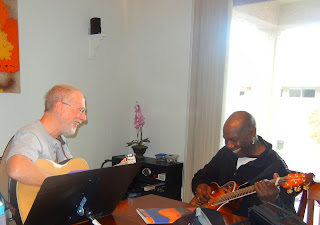 Bob and Theo in a joyous music session

Bob, Theo and I talked about that for awhile -- how easy it is to get caught up in seeking rewards for the future when the best reward of all is a life fully and lovingly lived.

Sometimes the process of achieving a goal is sweeter than the goal itself.

The daily commitment to living according to one's values and doing the right thing moment by moment, day by day, is its own reward.

It feels good to consider, right now, all that brings us together instead of focusing on the ways we differ. "People get notions about people who are different from themselves," Theo, a former social worker in New York City, mused. "We cling to stereotypes and we make assumptions about each other when we are much more alike than different." Something to remember in these divisive political times.

It feels good to take time just to be.  So many times we focus more on what we do or what we have than who we are.  What discoveries one can make in meditation, in stopping and quieting the mind, reflecting on what makes us both unique and one with each other.

Especially on a holiday like this one,  it's wonderful to take time just to savor life and its blessings. When I was a child, my parents had a dear friend named Carl Mueller who had a great talent for savoring life as it was happening. As my parents ran around in a frenzy of work and worry, Carl would take my brother Mike and me out to the grassy front yard where we would lie down and watch the clouds, enjoying the sunlight and the ever-changing shapes in the day and the vastness of space and starlight at night. Such times were an oasis of calm, of joy, of mindfulness in our otherwise troubled childhoods.

And now my brother is passing such glorying in the moment along to his own children. Yesterday, he sent me a picture he labeled "Our Carl Mueller Moment" -- a picture of him and his two-month old son enjoying cloud-watching on a late summer afternoon. 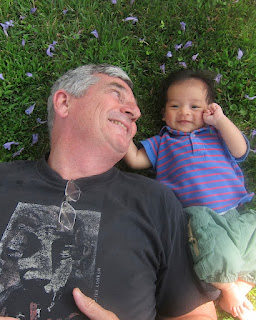 Mike and Henry enjoying the moment


Bob, Theo and I agreed that we're far from ruling out the possibility of an afterlife, a heaven. But we want to enjoy the glory of some heavenly moments now, all those small moments of peace and kindness and goodness that bless every one of our days.
Posted by Dr. Kathy McCoy at 3:13 PM