Henry Patrick McCoy was born today at 2:58 a.m. in Los Angeles.  He weighed 8 pounds, 6 ounces.  His parents are my brother Mike and his wife Amp. His already bossy big sister Maggie is nearly three.

His Daddy says he's a beautiful, perfect, incredibly sweet boy who loves to cuddle and who rarely cries. He marvels at how his laid-back, sweet son differs from his high-energy, intense little daughter whose enduring personality was quite evident as well in her first hours of life. How fascinating to see, once again, how each one of us is born with so much of who we are and who we will become already in place.

Henry's arrival, however, was much more stressful than his sister's nearly three years ago. There were some medical complications and concerns. But these were soon forgotten when Henry made his appearance, healthy and robust. As he held his newborn son for the first time, Mike felt a sense of warmth and peace and serenity from this child.

Sweet Henry. He is the second sweet Henry in our family.

He is named for his great-grandfather, our father's father, the grandfather we never knew. That Henry Patrick was a lawyer and activist who had lived in China and Mexico before returning to the U.S. He won a Carnegie Hero Medal for plunging into a well filled with poison gas to rescue a man trapped there. The effects of his exposure to the poison gas made his health delicate and may have been a factor in his untimely death at the age of 38. 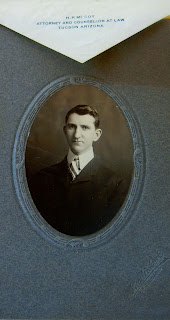 
He was a gentle and loving father to his children. Jim was eight and Molly four when he died and they never forgot his kindness and the warmth of his loving arms.

Henry, Elizabeth and baby Jim in 1913 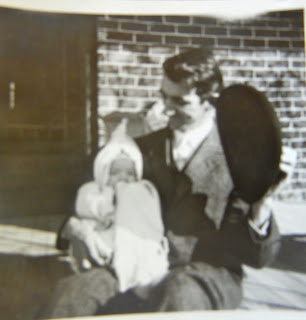 After our beloved Aunt Molly died in 2004, we discovered a trunk of old family photos in her attic, seeing pictures of Henry Patrick for the first time ever. We were stunned at how much he and my brother Mike resembled each other. They shared many traits as well -- intellectual brilliance, a penchant for Asia and Asian languages, social activism, compassion for others.

Though he died decades before my brother, sister or I were born, Henry Patrick was an important member of our family, kept alive by the loving stories our father and Aunt Molly told. That love lives on as another Henry Patrick has entered the world -- nearly 100 years after the late Henry Patrick cradled his son Jim.

What a different world it is and will be for little Henry Patrick!

The first Henry Patrick died when horses and buggies still mingled with cars on the dusty Tucson streets.  His son Jim and daughter Molly were still young children. He would never live to see them grown. He could not have imagined grandchildren. He would never have guessed that nearly 100 years after he held his newborn son Jim, there would be another little boy coming into the world -- a baby boy named for him, testimony to the fact that he is remembered with love by the grandchildren who never felt his embrace.

This 21st century Henry Patrick McCoy will grow up in a vastly different world than the one his great-grandfather knew. Communication is global and instant -- and his older sister Maggie is already computer literate. Her iPad is her favorite toy.

And it's a much more multi-cultural world. Great grandfather Henry Patrick grew up near Chicago, part of a ten child family, in an era where being of Irish descent wasn't considered a social or professional asset. Baby Henry Patrick is part of a larger world: his roots are not only in the U.S., but also in Thailand. His mother Amp is Thai and Henry has very excited grandparents, aunts and other extended family there. His parents own homes both in Los Angeles and Bangkok. So, like his sister Maggie, little Henry will grow up bicultural and bilingual, feeling at home both here and in southeast Asia. 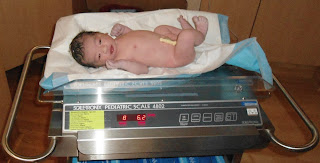 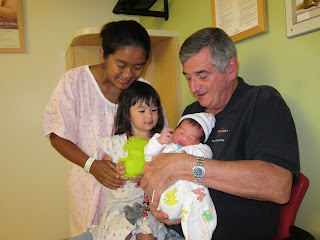 An armful of love, Mike with Henry and Maggie


What will he be like? Who will he grow to be?

Today, the day of his birth, there are so many unknowns, and so many warm wishes.

What matters most is that he is here.

May you be well loved and love well and live fully, blessed with the capacity for joy, insight, empathy and laughter every day of your life!
Posted by Dr. Kathy McCoy at 9:53 PM