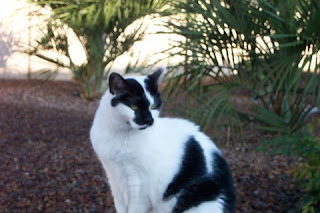 April was an especially cruel month for our friends who have lost beloved animal companions.

Only a few weeks ago, I wrote about our former next door neighbors losing their beloved cat Vilula and about the very special cats Bob and I lost in the past few years. And soon after that, I had an sad email from my high school friend Suse who told me that her cherished dog Sparkly had passed away and that she was comforted only by the knowledge that Sparkly lived with her adoration on a daily basis and that she hoped her once lively pet was "herding sheep on the Rainbow Bridge."

Now pet loss has come closer to home again: Jay and Linda, our neighbors who live two doors down from us here in Arizona, lost their sweet 17-year-old cat Zoey on April 26.

Bob and I had the pleasure of caring for Zoey and her two feline sisters Alice and Phoebe while Jay and Linda were on vacation last October and we fell in love with Zoey in particular. She greeted us warmly when we arrived for twice daily feedings and her patience as we measured out the medicine for her thyroid condition into her food was amazing.  Jay told us that she would answer to her name and also to her title "The Finest Cat in Arizona". And we soon realized that the title was quite apt. She was a treasure.

Zoey and Jay had a long and loving history. He adopted her from PAWS Animal Shelter in the Seattle area in 1995. It was love at first sight when Jay spotted the one-year-old stray.  She happily settled into Jay's home and his life and was at his side during some major life transitions including his marriage to Linda, two homes in Seattle, then a move to Arizona -- first to Cornville, then to Tucson, and finally to their new home in Sun City Anthem Merrill Ranch near Florence.  Zoey's good nature and fervent love for Jay made each transition and move an adventure and a joy as she delighted him and Linda with her quirky feline sense of humor.

Jay especially enjoyed her silliness, her funny little routines like a mad dash through the house after using the litter box, dipping her paws in her water bowl and then licking the water off.  She found pleasure in so many things: chasing leaves blowing in the wind, sitting in front of the refrigerator purring, greeting Jay and Linda when they came home.  A large cat -- 18 pounds in her prime -- Zoey had a tiny meow and a big purr.  She purred the most when Jay was around.

He was the center of her world. Frankly, she could take or leave her feline companions. She tolerated and even came to like Alice, an unwanted cat that Jay adopted some years later. But for Phoebe, Linda's cat who had come into the family when Linda and Jay met, Zoey had only contempt.  Besides Phoebe, Zoey didn't like vets (except a vet in Tucson who had treated her during her difficult 7 year battle with thyroid disease) and took a while to warm up to strangers. She really didn't need a lot of people or animals in her life because she had Jay.  When he left the house, she would wait by the door for him. When he worked outside in the yard, she would watch and paw at the window, begging to be let out to join him.  Of all the pets that Jay has had throughout his life, Zoey was the one who was most special, who truly captured his heart and well earned the title "The Finest Cat in Arizona."

Lately, her illness, which she had battled so stoically and courageously, began to overwhelm her increasingly frail body. All of us in the neighborhood worried. Was she eating again? Could she walk better today? Her condition fluctuated over the last few weeks, but, sadly, that last week, her systems began to shut down.  Finally, Jay knew it was time.  His heart breaking, he took her back to the one vet she could tolerate, that wonderful doctor in Tucson, who helped end her suffering as Jay held her in his arms. The last image she saw as her eyes dimmed was Jay's loving face. It was a fitting, if heartbreaking, end to a very special love story.

Such endings are so very painful and stay with us much like the loss of other beloved family members. I know Jay will miss Zoey forever and the only consolation may be that he gave Zoey a wonderful life and did everything he could for her -- including the hardest thing of all: letting her go.
Posted by Dr. Kathy McCoy at 6:33 PM