The news was not a day brightener: the publisher of my book Purr Therapy is terminating our contract, taking the book out of print and destroying any leftover copies. The reason, four years after publication, is quite simple: relentlessly poor sales, despite some excellent reviews. As of September 30, Purr Therapy will be no more. 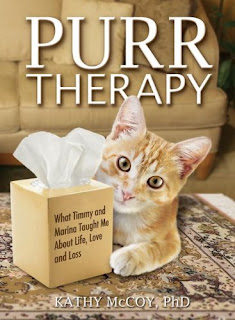 This development wasn't a total surprise. Sales for the book have been dismal from the beginning. The numbers have been so devastating, in fact, that my literary agent wished that we could deny the existence of Purr Therapy altogether three years ago, when we were putting together the proposal for my most recent and considerably more successful book We Don't Talk Anymore. We agreed we wouldn't mention Purr Therapy specifically in the proposal. But we were still aware of the fact that prospective publishers, checking the Neilson sales numbers of my previous books, would certainly stumble on the embarrassing evidence.

Purr Therapy, in short, has been one of my biggest publishing failures.

It started with love -- for the two cats, Timmy and Marina, memorialized in its pages. And there was so much hope. Cat books are supposed to sell well. One with two touching and compelling cat stories should be irresistible to a vast audience of cat lovers. Except it wasn't. Despite my efforts at promotion, it didn't sell. Despite signings sponsored by the vet to whom the book was dedicated and the Barnes and Noble bookstore in Valencia, CA. it stayed stubbornly in the sales figures netherworld. It never earned back its tiny advance. It was certainly not a financial bonanza for me.

I've joked for some time that my most substantial benefit from Purr Therapy was my three-legged black cat Ollie, whom I adopted as a kitten from Catoberfest 2014, an annual event in Santa Clarita, CA, where I did book sales and signings for Purr Therapy shortly after its publication.

During a lull in the signings, I spotted him in a cage nearby:  a tiny sad-eyed, crippled black kitten. He was the poster cat for the unadoptable and for animal rescue and sanctuary donations. He was missing most of his right hind leg and had a huge hernia. He had been rescued from a trash can where he had been discarded soon after birth. He would need future surgeries and lots of tender loving care.

He was irresistible.  I ended taking him back home with me to Arizona. Ollie did turn out to be the most expensive free cat ever-- needing three emergency surgeries within his first two months in residence with us. But how can one put a price on love?

When I heard the news this week about about the demise of Purr Therapy, I felt sad but it didn't wreck my day. Instead, I thought about it as a disappointment certainly, but also an opportunity to learn and to grow.

Failure can teach us a great deal. Our failures can keep us humble and open to new ways of thinking and doing. Our failures present an opportunity to admit and accept what isn't perfect in our lives.

And I value that perspective. Like many people, I tend to learn more from failure than from success.

When things are going well, it's too easy to get a bit smug and self-satisfied with success. With a failure comes self-examination. You ask yourself what went wrong, what you might have done better and how you might like to take a different path in the future.

Perhaps most important is this lesson: when you embrace a failure, you learn that you can fail and life goes on. The sun is still shining. There will be other opportunities and new adventures.

Embracing a failure can teach us not to fear less than perfect outcomes.

So many of us have been raised to be phobic about failure -- and that can hold us back. Fear of failure can keep us from trying as hard as we might to achieve a goal or dream. It can keep us from trying at all. It can also prevent our recognizing small steps that may fall short of a treasured goal, but represent progress along the way. When we fear failure, we not only avoid risks but also fail to give ourselves credit for incremental progress.

In many ways this is learned behavior, honed by parents who expected perfection and nothing less. I'll never forget my father thundering "An A-minus is NOT an A! You failed! You failed to be the best!" when I proudly brought home a report card with an "A-minus" in an advanced high school math class. Math had been my weakest subject my whole school career. Taking the risk of tackling four years of high school math -- with a small group of math-savvy classmates -- had been a huge challenge and an exercise in humility. No, I would never be the best student in that class. But that "A-minus" was hard won and I was thrilled -- until my father told me that it was not enough. That only perfection would do.

Many of us get such messages from parents or teachers or bosses or society in general. Women get messages about needing to look perfect, to be at a certain weight, in order to be worthwhile people.

But embracing perceived failures or one's own imperfections doesn't mean giving up. This isn't a matter of saying "Well, that's just the way I am. Take it or leave it!" or "That's the way I was raised!" or "I'll never be any good, so why try?" It means recognizing the value of taking risks and of celebrating steps along the way to a long term goal. It also means embracing the fact that you are valuable and lovable whether you achieve a goal or expectation or not, whatever your weight or physical imperfections, whatever your strengths and weaknesses or widely varying competencies happen to be.

As time goes on, I'm learning, more and more, to embrace my failures and imperfections. I'm learning to accept the parts of me that I'd rather not acknowledge as part of my whole. While my bright, most visible side is loving with an open heart and open mind, funny, pleasant and compassionate, my darker side can be depressive and self-centered, judgmental and stubborn.  I'm learning to embrace all of what lurks within. Accepting my imperfections doesn't mean that I don't want to be better. I do strive daily to be more loving and less self-involved, more accepting and less inclined to judge others. Sometimes the diverse parts of myself struggle mightily. But accepting my dark side, embracing the fool within, takes away the covert power of the darkness. It makes me more comfortable with the imperfect person I am and more at peace with all of life's vicissitudes.

Accepting one's own strengths and weaknesses, learning from failures instead of considering these evidence of one's own hopelessness and/or victimhood or of the world's cruelty and unfairness, makes one more likely to enjoy life along the way -- whatever the outcome of one's efforts, goals and dreams.

I wish that Purr Therapy had been a huge success. I did the best I could at the time. And writing that book was a pleasure. What more could I really ask? There are a myriad of reasons why it failed -- some failures by others involved, some failures that were all my own. I have come to accept and own all of these. I'm learning and growing and writing better now. And I think I'm wiser today than I was four or five years ago.

Besides, Purr Therapy wasn't a total bust. It brought a little crippled black kitten named Ollie into my life. And he has turned out to be amazingly healthy and able -- running like the wind, jumping with strength and expertise. His missing leg doesn't hold him back. He is fully engaged with life, the crowd favorite among his three fellow cats in residence. Ollie is one of the most affectionate, wonderful cats ever, spending hours purring, cuddled on my shoulder or curled in my lap. And I never lose sight of the fact that we would never have found each other -- but for Purr Therapy. 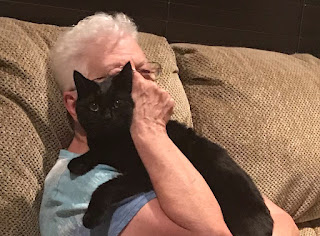 It's true that Purr Therapy didn't live up to my initial hopes and dreams. But it did bring so many positives to my life. There was the thrill of writing about animals so close to my heart, the extraordinary Timmy and Marina whom I loved so much and lost too soon; the pleasure of reconnecting with the wonderful Dr. Tracy McFarland in Santa Clarita, CA, the best vet ever, and then the unexpected, incredible joy of Ollie.

So I am blessed. And life goes on...with the sun shining brightly and each day a new adventure.

P.S. Just got the news that Dr. Tracy McFarland, The Cat Doctor of Santa Clarita, CA, has passed away this week from an aggressive cancer. She was, indeed, the best vet ever and a wonderful person I'll never forget. She gave me Timmy and Gus, the best cat duo ever, back in 1998 and her last gift to me was my precious Ollie, after we signed copies of Purr Therapy together at Catoberfest in California in 2014. Every time I hug Ollie, I'll think of Dr. Tracy with love!