Bob and I moved to our spacious new home in Arizona fourteen months ago and have delighted in owning our first brand new house with all the modern conveniences and plenty of space for us, our cats and our hobbies and interests. The neighbors are wonderful, the community welcoming, the pace of living is just what we had hoped. In short, things couldn't be better. 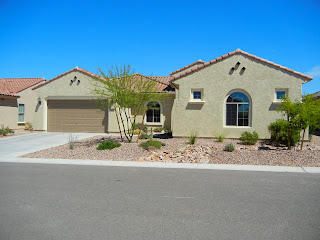 Then how to explain my sudden tears when our next door neighbors Carl and Judith,  while vacationing in Southern California, sent us an online postcard of our Valencia home of 29 years, a house we sold and left 14 months ago? 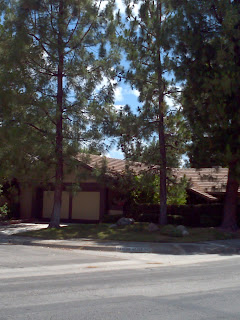 "Our home!" I gasped when I saw the picture. I noticed the pines had grown even taller, that the citrus trees inside the gate were in bad need of trimming, that the little flower pot I had put on the gate when our house went up for sale was still sitting there. And, as I studied the photo, tears rolled down my cheeks. I couldn't understand why I was crying. Bob and I have agreed many times that it would be very hard to go back to 1300 square feet after spreading out so happily over 2345 square feet here. It would be very tough to go back to a neighborhood where people were so busy working and commuting that they didn't have the time or energy to get to know each other. The Los Angeles area traffic would be horrible after the freedom of country roads. And yet....

I remember the day we moved into the house in Valenica -- the first we had ever owned. I was 36 and Bob was 37. We were thrilled with the openness of the floor plan that made this little house seem larger. It was almost new: the previous owners had lived there for only a few months before deciding to move back to Canada. They had planted pine trees and built berms in front of the fence in the front of the house, nothing else. Over time, Bob and I added our own touches -- a line of citrus trees producing delicious grapefruit and oranges in winter, fragrant blossons in spring, lush grass, shade trees on the backyard slope and, later on, a beautiful hand set stone waterfall on that slope  that we called "Molly's Falls" in memory of my beloved Aunt Molly who always thought there should be a waterfall there. The sound of the water often soothed my soul after an exhausting day and brought back memories of Aunt Molly and the wonderful times we had together in that house. 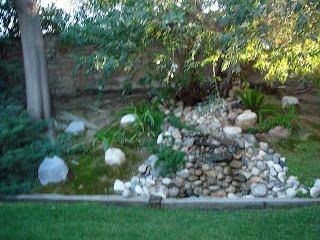 Molly's Falls at former home in memory of Aunt Molly

Because my parents died when we were all still quite young, my home in Valencia became the family homestead for my brother and sister, who joined us for many years of holidays, fun visits and quiet talks. Bob and I knew many years of contentment, sitting by the hearth on rainy days, enjoying reading in our living room lined with floor to ceiling bookcases. Our first cat Freddie, the only cat we ever allowed outside, roamed the slope with great pleasure, hunting, communing with neighborhood cats and resting in the shade of the many trees. Twenty-nine years of memories -- both joyous and painful, 29 years of hopes and dreams, 29 years of daily living took place under its roof.

And that little house was our safe haven, our sturdy little home that stood up to a number of challenges.

There was the 1994 Northridge earthquake that awakened us with terror one early morning in January. Everything came out of the kitchen cabinets. Two bookcases crashed over by our bed. The house was a mess and, hampered by lack of running water, it took us more than a week to clean up (trying to clean a mixture of broken glass mixed with Midori melon liquer off the kitchen floor with a bottle of Evian was a real challenge!). But houses nearby were actually split in two by the quake. A whole condo project a few blocks away was destroyed. So, even as we scrubbed, we were thankful that the house itself had stood firm.

A year and a half later, the house next door -- the home of our beloved neighbor Carol Wilson, a 65 year old widow -- caught fire due to an electrical wiring defect in the attic. The fire, undetected, quickly spread throughout the attic, coming down through a ceiling fan outlet in Carol's bedroom, where she was relaxing, watching a Dodger game on t.v.  The flames ignited the oxygen tanks Carol kept by her bed. The house exploded. I was at a nearby supermarket at the time and heard the explosion, which sounded like a sonic boom. I wondered if the space shuttle was landing at Edwards Air Force Base again. Unusual for it to be coming in at 9 p.m. I drove home and rounded the corner to see my own house on fire. It took another moment to realize that the primary fire, the real devastation, was next door. The scene was total chaos with firefighters, police, and a crowd of neighbors. I searched the crowd frantically for Bob, for Carol....The arms of strangers enveloped me as we all came together for yet another neighborhood disaster. Finally, I found the arms of Carol's other next door neighbor Ruth Milne. She held me tight. "She didn't make it," she said softly. We wept together until Bob found us.  Our house was saved. We only lost our roof.  But the loss of Carol saddens me to this day.

And then there was the day in 2003 when, after a difficult recovery from thoracic surgery, I had been called back to work a week early at the psychiatric clinic where I was a therapist. Angry, resentful and still hurting, I went.  And while I was gone, there was a violent break-in at our house.  Gang members from nearby San Fernando chopped in the front door with an axe and upended every shelf, drawer and piece of furniture in the house, stealing jewelry, my laptop computer and some small electronics. We found  our cats Timmy and Gus trembling under the only towel remaining in the linen closet. There was a shoe shaped black smudge on Gus' head. It was weeks before they would go back into the living room.

About that time, my literary agent Susan Protter, on the phone from New York, asked the logical question: "Haven't you ever thought about moving?"

We had thought about it, but this was so much home to us. We decided that only retirement and a really terrific new home and community could make us move.

And so the time came. We found Sun City Anthem Merrill Ranch in Florence, Arizona. It was exactly what we had hoped and dreamed.  And we saw a house there, under construction at the time, that was even more than we had dreamed.  Indeed, we had never imagined that we'd be living in such a big, beautiful new home. Everything was -- and is -- perfect or nearly so.

So why did the tears come when Carl and Judith sent us that online postcard of our former home?

Where is home, after all? It's said that home is where the heart is. And our hearts are certainly here in this new home, in this community we truly love. Unless fate somehow intervenes, we expect that it will be our home for the rest of our lives. And yet, it's quite likely that we will probably be here for fewer years than we lived in that modest brown house in Valencia.

I guess the tears were for all the years of living, loving and growing there. The tears were for the memories -- of friendships made and friends tragically lost, for the fragrant citrus blossoms and juicy harvests, for the holidays shared with family, for good times with friends we see less frequently now, for the familiarity and comfort within those walls, for the soothing sound of Molly's Falls.

I guess, however comfortable, content and absolutely joyous life is here, a piece of my heart will always be in that little brown house surrounded by pine trees and soothed by the sound of Molly's Falls.