Gus: A Life of Love and Kindness

Whenever I've written a tribute to a special cat, it has been to a cat who has passed away. This tribute is to Gus, who is very much alive, and turning 13 years old this week.

Gus is a big, sweet red/orange tabby whose loving spirit has brightened our lives and the lives of the six other cats -- four now deceased -- that we have had over the years. He is the only cat we have who has known every one of the others.

I wasn't looking for a cat when I first encountered Gus and his brother Timmy.  I went to Dr. Tracy McFarland's office to get more saline solution for our dying 17-year-old Freddie, our first cat. There, in a cage in the lobby, were five beautiful, outgoing kittens who looked like little lion cubs. The receptionist told me that a postal worker had found these five kittens abandoned in a box in a local junkyard.  They had been only three weeks old, not even weaned, and close to death. He brought them in to Dr. Tracy McFarland, known as The Cat Doctor in Santa Clarita, CA.  She spent a month nursing them back to health. The staff bottle-fed and socialized them. Three -- two red tabbies and a calico -- were already adopted. The two remaining -- who saw me and rushed to the front of the cage, making eye contact and purring -- were a red tabby they had named Big Red and Blondie, a Burmese mix with faint red tabby markings. Blondie was the runt of the litter. He had a heart problem that could prove fatal if it didn't correct itself within a year. No one wanted a little kitten who could die. His brother Big Red watched him closely. They slept curled up together. They were so bonded that Dr. Tracy insisted that they be adopted together. 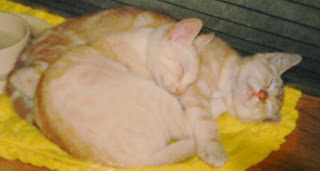 Timmy and Gus as kittens in August 1998

I called Bob from the vet's and begged him to come see these kittens. He was aghast. We had a much loved, dying 17-year-old cat who had always been an only animal. Was it fair or even sane to bring in two kittens at this juncture? "I know," I said. "But we have to have these kittens. There's something about them that I can't begin to explain."

Bob arrived at Dr. Tracy's office, took one look at them and fell in love. He took Blondie out of the cage and the kitten rubbed his cheek against Bob's and lay his head on his shoulder, purring loudly. Bob's eyes filled with tears. "Even if he dies soon, no matter how short or long his life is, I want every day of his life to be filled with love and happiness," he said, his voice breaking. "And I want to name him Timmy, the sweetest name I know. We'll take them both."

So Timmy and his brother Big Red -- whom we re-named Gus -- came home with us.  While our old cat Freddie found curious, playful Timmy a bit of an annoyance, he quickly warmed up to Gus.  They shared food. When Freddie could no longer groom himself, Gus would groom him. As Freddie lay on a quilt at the foot of our bed, shivering and nearing death, Gus lay beside him to warm and comfort him. 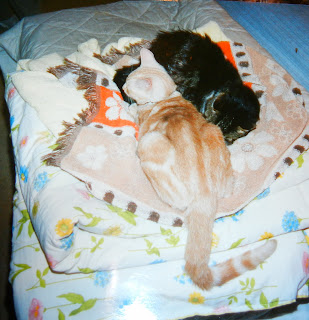 Gus comforting a dying Freddie in 1998

The day Timmy and Gus were neutered, Timmy was ill from the anesthetic most of the day -- and Gus held him in his paws, comforting him.

The love between these two brothers brought so much joy to our lives for the next nine years. Timmy's heart problem went away and he grew up healthy and strong.  Timmy, who was outgoing and loved people, eventually became my first therapy cat, working with me in animal-assisted therapy. Gus, who was equally loving but slow to warm up to strangers, limited his affection to our family and his beloved brother. 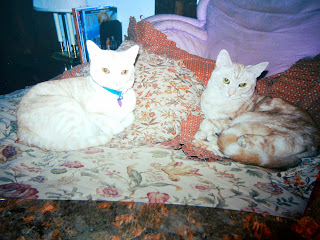 
And when Timmy died suddenly from melamine poisoning due to tainted cat food in 2007, we feared Gus would die as well. Not became of the cat food -- they had eaten different brands -- but because of his grief.  Gus was inconsolable. He howled all night, every night, for three weeks after Timmy's death -- until Dr. Tracy suggested that we get a pair of kittens for him to nurture.

It worked wonderfully.  When we brought home Maggie, a Bombay, and Teddy, a black and white tuxedo kitten, from a local rescue organization, Gus embraced them literally and in spirit. He quickly bonded with Maggie, especially, grooming her, holding her, sleeping with her.  He was fond of Teddy, too, grooming and hanging out with him. But when Teddy died suddenly of a neurological birth defect about a month after we adopted him, Gus was unperturbed. He had his Maggie to nurture. 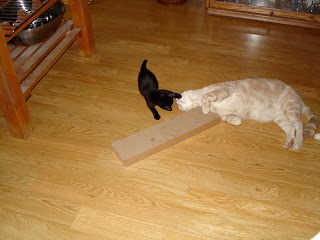 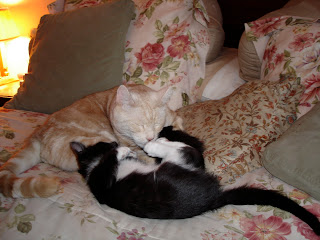 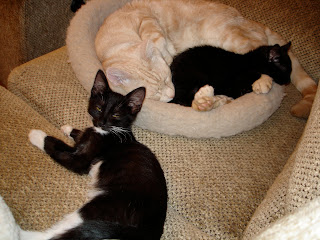 Gus, Maggie and Teddy settling in for a nap

A year later, I was in PetSmart to get cat grass for Gus and Maggie. Passing the adoption center, I caught a glimpse of a beautiful flame-point Siamese cat -- a two year old adult -- reaching a paw through the bars -- and I was enthralled. Her name was Marina and she had been relinquished not once but twice in her young life. The first family gave her up because their baby proved allergic to cats. The second family relinquished her because she was too "needy."  As she looked at me with love and longing, I couldn't resist.  There was no kitty grass in stock. We went home with Marina instead.

Maggie was not amused, growling like a Rottweiler through the closed bathroom door at Marina for the first week she was home. (They later became buddies.) Gus was more enthusiastic, rushing to groom and embrace her.  Marina, who hadn't been with multiple cats before, was wary initially, but warmed to both Gus and Maggie in time.  She also became my second -- and last -- therapy cat, showing an amazing gift for working with clients in conflict.  Shortly after I closed my practice and Bob and I retired, moving to our new home in Arizona, Marina -- a lively, joyous creature -- became quiet and stopped eating. We rushed her to a local vet who told us that she was in end-stage leukemia with multiple organ failure. She died two days later.  The day she died,  Gus  and Maggie were both by her side, offering comfort.

I was heartbroken and in an irrational desire to find another Siamese mix to replace the very loving, cuddly Marina, I searched local rescue organizations. There was a Lynx point Siamese mix kitten at a shelter 40 miles away. Her name was Sweet Pea. She looked irresistible on line. And she has taught me a lesson I should have known: no cat is ever like another.  Sweet Pea is hell on four legs. She can drive Maggie -- and even Gus -- crazy with her kitten antics that have persisted into her second year. But most of the time, Gus is infinitely patient as she nips his ears, his tail and his nose. 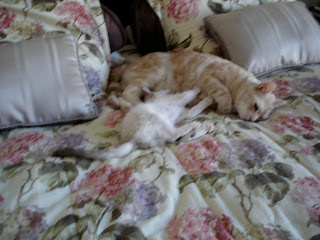 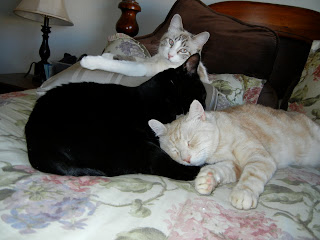 When my husband Bob suffers nightmares related to his temporal lobe epilepsy, Gus is quickly by his side. When I am reading in the evening, Gus snuggles up beside me, purring and rubbing. When I have a migraine headache, Gus is there instantly to comfort me and keep me company.  In all his years with us, he has never scratched or bitten anyone -- even kids who have picked him up or strangers who have rushed to pet him. He is the kindest, most gentle cat I have ever known. And he is a warm, droll companion, enjoying football games with Bob, watching with quiet bemusement as I practice tap dancing. 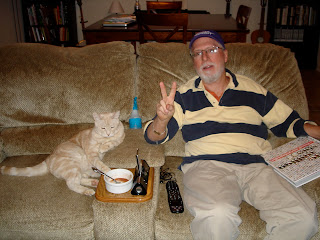 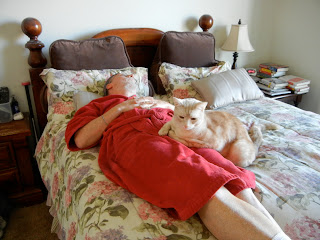 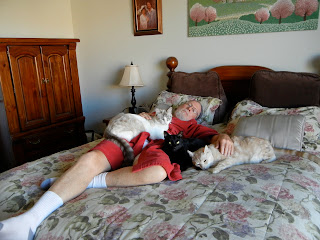 Maggie and Sweet Pea are quick to follow Gus' example


He is an old thirteen. He used to jump great heights to run along the tops of our library bookcases. His jumping days are over.  His gait has slowed. His days are spent snoozing between the pillows of our bed or in the little bed he has had since he was a kitten.  We wonder if he had some exposure to the tainted cat food melamine that killed Timmy. Or perhaps the loss of his brother and other feline pals has weighed heavily. Or maybe he is just getting old along with us, savoring the days, and committed to live in a spirit of love and kindness.  Not a day goes by that Gus doesn't give us the gift of his warmth and affection. And not a day goes by that we don't delight in his gentle, sweet presence. We consider every day we still have Gus a blessed one. We want every day of his life to be filled with love and happiness.