The Relics of Our Lives

I happened to open a box in the garage the other day and glimpsed history: it contained some mementos from my parents.

There was the slinky black dress with sequined roses on the bodice, circa 1940, that was my father's first gift to my mother. And a double portrait of my parents in their high-flying youth -- my mother as a flight attendant for American Airlines, my father as an Army-Air Force pilot. 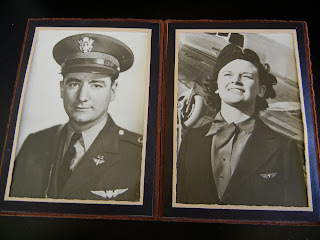 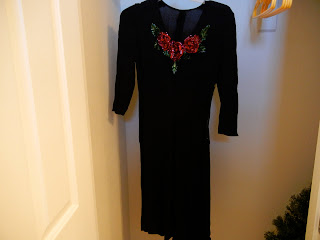 There were the letters and cards they sent each other during their courtship -- during the young and hopeful times I never knew.

There was my mother's career scrapbook, with clips of news stories, publicity photos (including one with and autographed by Eleanor Roosevelt, First Lady at the time) and ads where my mother -- one of the first American Airlines flight attendants hired in the 1930's -- gave product endorsements for everything from milk to hair conditioner -- and changed her name from Ethel to Caron in the process. 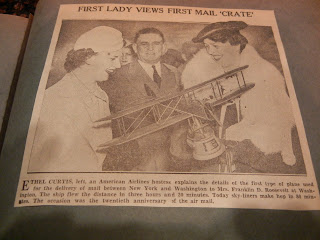 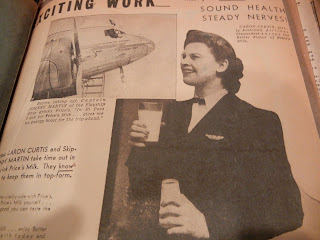 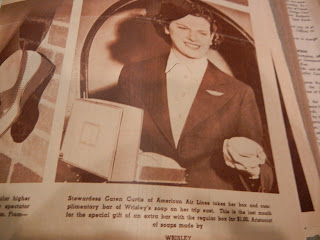 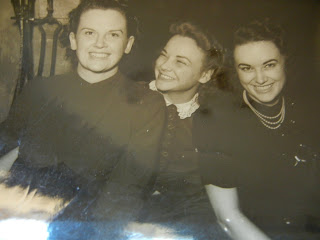 By mid-life, we accumulate not only the keepsakes of our lives, but start to inherit others' treasures.

When I was in my twenties, my mother used to remind me about my high school and earlier treasures clogging a closet at my parents' house. Now my parents' keepsakes have found a home in my closets and garage.

It's so interesting what we choose to keep, which souvenirs from the lives of those we have loved and lost, stay with us.

One of my most cherished souvenirs from Aunt Molly's life is a plastic parrot alarm clock. She loved anything with a parrot motif -- and I gave her that little alarm clock for Christmas many years ago. Even though she was retired by then with little use for an alarm, she was delighted. She would hold the parrot on her lap and push the button to trigger the alarm: "Awk! Wake up! Wake up! Uh-oh! WAKE UP!! Ohhh! Good morning!" And she would throw back her head and bray with laughter. I can push that little button now, watch the parrot squawk and flap its wings and remember her laughter with love. 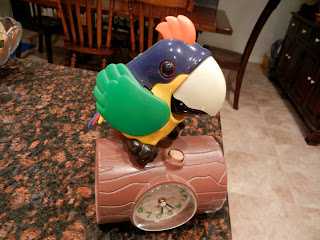 Some of Aunt Molly's souvenirs tell tales of sad family history.  Molly was only four years old when her father died in Mexico, seeking treatment for a debilitating illness. Her mother, whose grip on sanity and sobriety loosened considerably after she lost her husband, couldn't tell Molly or 8-year-old Jim, my father, that their Daddy was dead. She told them that he was on an extended business trip -- then packed up the family and moved from Tucson to L.A. so that Jim could work as a child actor in movies and in vaudeville to support the family. (Alcoholism killed her while Jim and Molly were teenagers and my father worked multiple jobs to put both himself and Molly through college at UCLA.)

In an old trunk from Molly's attic, I found a letter from her to her Daddy, written in childish script from Los Angeles, when she was eight years old:

"Dear Daddy: I love you and miss you so much! Please come home soon from your business trip. I'm writing our new address for you so you'll be able to find us. Love and kisses, Molly"

It would be another year before Molly learned that her beloved Daddy was never coming home.

When my brother, sister and I were kids, we heard a lot of fascinating stories about their much loved Daddy.  They told us about their father winning a Carnegie Hero Medal for rescuing a man from a well filled with poison gas. They said that he didn't feel he deserved the honor because the man died a day later, and  so he evaded the Carnegie awards committee, traveling to China, South America, through Mexico and finally to Tucson, AZ where the committee finally caught up with him and gave him the medal plus $1,000 to buy a home. He settled down and married the next year, starting a law practice in Tucson that was dedicated to fighting for the rights of under-served minorities like Native Americans and immigrant Chinese. We used to take all these tales with a grain of salt, thinking that this was probably the fantasy of children who had lost their father much too soon.

But, while Bob and I were cleaning out Aunt Molly's house after her death in 2004, we opened another trunk from her attic and found evidence that those tales about their father were true.  There were 100 year old newspaper clippings reporting his brave deed and flight from the Carnegie Commission. The clippings described him as a law student at Northwestern University -- my alma mater. I had never known that he went there for both undergraduate studies and law school.  Then I found a picture of him and was shocked. He looked eerily like my brother Michael -- tall and lean with facial features that were startlingly similar. Then, under the photos and clippings, I found a little box and opened it. It was the Carnegie Hero Medal, finally awarded in 1911.  I gave it to Michael. Somehow it just seemed fitting. 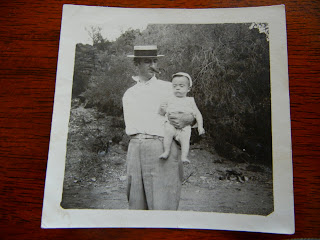 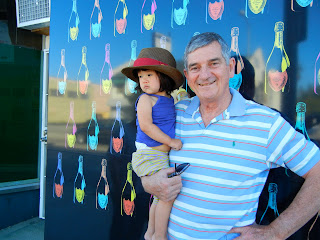 Mementos from Bob's parents surround us. They were wonderful at needlepoint and made us beautiful holiday ornaments that we treasure to this day -- hanging them high on the tree so that none of our three cats can steal and savage them. Paintings done by Bob's father and framed needlepoints from his mother hang on the walls of our new house -- as they did for decades in our California home. Both have been gone for so many years now. But their memories linger daily in their beautiful craftwork. 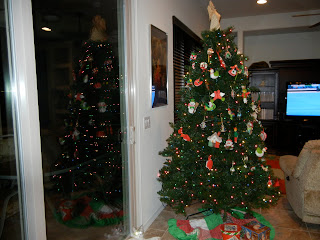 Christmas 2010 with ornaments made by Bob's parents 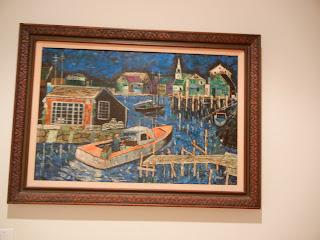 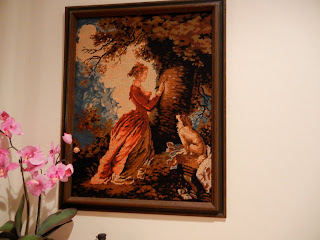 Needlepoint by Bob's mother Alberta in its place of honor


I wonder who in the future will treasure these momentos as we do? Who will hang Bob and Alberta's Christmas ornaments on their Christmas trees? Will anyone claim and keep The Dress? My mother's career scrapbook? Aunt Molly's plastic parrot?

And sometimes I wonder: what will I leave behind that someone else will treasure? Will it be a funny artifact of my life? Some pictures? Some of the books I've written? My treasured LP's that Aunt Molly gave me for Christmas when I was 10 -- of Cyril Ritchard, whom I adored, reading "Alice in Wonderland" and "Through the Looking Glass"?  Or perhaps the childish novels I wrote about happy orphans in my father's unused desk diaries when I was six or seven? Or the audio recording my father made of me at the age of three, telling him family stories and talking him into such a stupor that he fell asleep during the recording, snoring loudly? Or none of the above?

Maybe the best memories I could leave behind are moments of kindness, caring and love. When I really think about that, memories of what we do are so much more precious than the stuff we leave behind.

Quite beyond the artifacts I keep of those I've loved and lost, I remember my mother's loving arms, her endless patience and contagious optimism, my father's funny and poignant stories and his encouraging me to write my own stories as soon as I learned to read.

I remember Bob, Sr. and Alberta Stover as the best in-laws I (or anyone) could have had. Their loving acceptance, even though they sometimes found me puzzling (like when I chose to keep my maiden name rather than assume theirs) was unwavering. Although marital happiness eluded them, they rejoiced in ours.

I have so many loving memories of Aunt Molly -- dashing with her into the sea, pulling each other into the surf and laughing, sitting by her side on the beach or just relaxing on the porch in the summer as she made up witty poetry that I memorized at the time and, years later, wrote down to surprise her one Christmas, having every holiday, every day she shared with us somehow brighter because she was there. 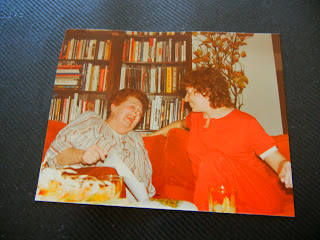 Maybe the best mementos aren't stored in boxes or hung on the walls. Maybe the best life relics of all are the warm memories of love and pain and laughter shared, memories we keep in our hearts forever.
Posted by Dr. Kathy McCoy at 11:43 AM