Many families have a shadow member, a beloved lost relative who lives on in faded photographs, family stories and continuing tears.

George Walter Curtis, my mother's younger brother, is a prominent shadow figure in our family. Forever young, forever missed, he haunted my youthful imagination.
I remember one summer, while visiting my grandparents' Kansas farm, I explored the attic of their house with my cousins Jack Hill and George Taylor, who had been named for the uncle he never knew.  I opened a drawer and pulled out a little box. Opening it, I saw a medal -- a Purple Heart. "Oh," said my cousin George, taking the box and closing it gently.  "Don't let Grandma know we saw this. Don't ever mention it to her. It will make her cry. That's Uncle George's Purple Heart. Both Grandma and Grandpa can't talk about George Walter without crying, even after all this time. So please don't say anything."
I kept quiet.
But at home, George Walter was a real presence. My mother, who sometimes talked of him with tears in her eyes, told me stories of a sweet little boy, eight years younger than she, who loved to play hide and seek, but would always blow his cover by hiding in the same place -- his mother's sewing machine cabinet -- and by singing "Jesus Loves Me, This I Know" while he waited for his sisters to find him. 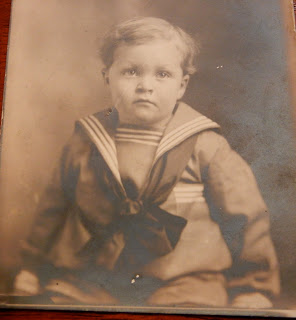 George Walter Curtis - 1922
She told me that my grandfather not only adored him, but saw George as a vital link to the future of the family farm. From an early age, he did chores eagerly, learning every aspect of the farm's operation. He was an excellent student and star athlete, both in high school and in college, where he majored in agricultural science. 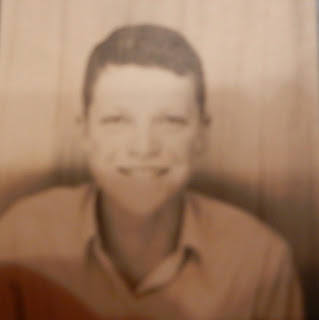 George Walter at age thirteen
He enjoyed life to the fullest -- whether he was working on the farm or playing with his new little niece Caron, named for my mother and the daughter of my mother's closest sister Evelyn. He loved to spend time with her and dreamed of starting a family of his own once the war was over. 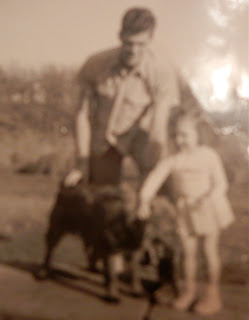 George Walter and niece Caron - 1943
World War II loomed large in his immediate life plans. He became a Lieutenant in the Army Air Force and was a B-24 navigator. He wrote enthusiastic letters home from his training base in Texas -- how swell his fellow airmen were, how he had met a nice girl, how they liked to go to church together.  He was delighted when he got leave that would allow him to be with his parents for his mother's birthday on July 27 and his 24th birthday on July 28 before he left to rejoin his unit on July 30, 1944 for the long trip to England and combat over the skies of Germany. 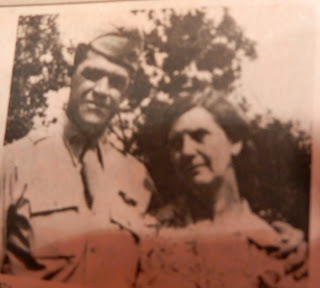 The last goodbye - Lt. George Curtis and his mother Gladys
On October 6, 1944, his plane was shot down over Germany and George was hit by a stray bullet. As they prepared to abandon the flaming aircraft, a buddy dragged George, in his parachute, out of the plane. But George was dead before they reached the ground.
For a farming family to lose an only son was a disaster. But the emotional toll was far greater. My grandfather, a kind and gentle man who loved his family dearly, never recovered from his loss, retreating into memories and quiet grief, as he continued running the family farm until his death in 1963 at the age of 78. While my grandmother enjoyed her daughters and warmly embraced her grandchildren, there was always the grief, the quiet moments alone, when the tears would come again.  And she would relive some of the old and chilling fears when, in another time and another war, three other loved ones went to war: my cousin George in the Navy, cousin Jack in the Air Force, flying transport planes from the U.S. to Southeast Asia and my brother Mike, whom she raised through adolescence,  in the Air Force, flying F-4 fighter jets in combat over North Vietnam. She welcomed them all home safely.  She lived to see Mike go to medical school. She lived to pass on to him a few of the keepsakes from her father that she had saved for her son who held her tight one late July day and then boarded a train, never to return.

The generation in the family who knew and loved George directly is quickly passing.  His entire immediate family is gone: his parents and all three sisters. Of the next generation, only Caron, born in 1940, knew him and felt the warmth of his embrace.  When she thinks back to those hazy, long-ago memories, her eyes fill with tears.  And those who came soon after, but too late to know him directly -- my cousins Jack and George, my brother Mike and me-- all of us born between 1945 and 1948 -- grew up feeling a bit of the grief our grandparents and parents felt, the void he left in the family, the heartbreak of the loss of this very special -- and very typical -- young man. 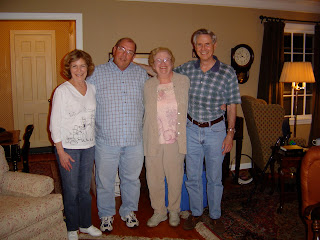 Cousins united in memory, from left: Caron Hill Roudebush,
George Taylor, Kathy McCoy, and Jack Hill
I was reminded of the loss, the sacrifice, the promise that once was when I visited the cemetery in Toronto, Kansas, the small town where my mother and her siblings grew up, on Memorial Day in 2007 with my cousin Jack. There was a moving ceremony with an honor guard made up of elderly World War II veterans, all of whom knew Uncle George well. 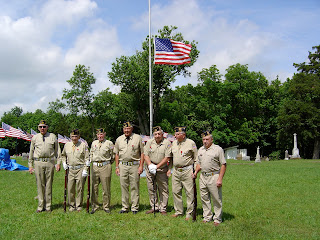 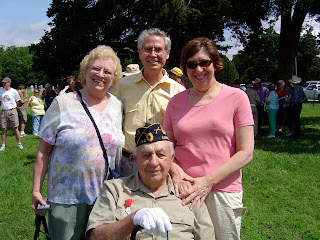 One of the Honor Guard, Leslie Sherman, was George's first cousin, at the cemetery that day with his daughter Candace, one of my favorite relatives. He told me that he also had been Uncle George's college roommate and felt his loss in so many ways, on so many occasions throughout his long life.  As they do every Memorial Day, Leslie and Candace had already decorated the grave that Uncle George now shares with his parents. 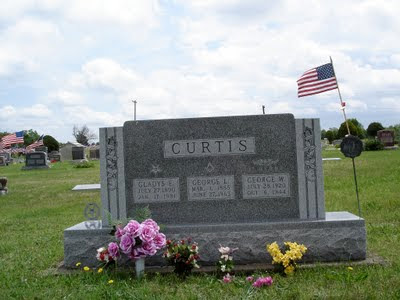 Seeing Leslie with Candace, I thought of all the life experiences that George Walter had missed: the church-going girlfriend who just might have become his wife, the cherished children, the farm lovingly tended, the blessing of growing old close to the land and to the people he loved most.  I thought how such a vibrant young life had been snuffed out in a minute, one of the many millions of precious lives lost in World War II and in all the wars to follow.

And I thought of the extension of grief, of missing him and loving him from one generation to another and then another.  And we, who loved him but never knew him, bowed our heads in silent prayer as a soft, warm breeze blew and a bugler played taps in the distance.
Posted by Dr. Kathy McCoy at 8:08 AM