It came as a chance remark recently.

Liz Canfield, a friend of mine for more than 40 years, mentioned casually how grateful she was to be receiving a pension from Austria as it enables her to help her daughter with some recent unexpected  expenses.

A pension from Austria? I knew that Liz came from Austria originally, but, with children near my age and a Christian background, I had assumed she had immigrated before the war or come soon afterwards in an ordinary relocation -- if there is such a thing.

"Why do you get a pension from Austria?"

"Because I'm a Holocaust survivor..."

How could I have known Liz for so many years and never known something about her life that was so...huge? 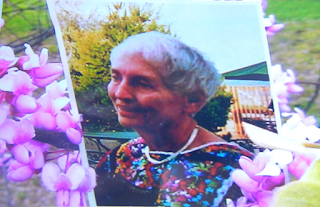 She told me that her father had converted to Christianity in his youth and that she and her siblings were baptized into the Christian faith. But her grandparents were Jewish and so her family was considered Jewish by Nazi conquerors who marched into Vienna when Liz was 15. Her memories are of fear: a neighbor being beaten by storm troopers, elderly Jewish men scrubbing sidewalks with toothbrushes as soldiers looked on, dressing up in clothing that resembled Hitler Youth in order not to stand out and keeping her head down as she walked quickly through the city to visit her grandparents -- grandparents she was to lose in the gas chambers of Sobibor. Although she, her parents and her brother and sister eventually made a harrowing escape from Austria -- first to Holland, then to the U.S. -- the memories of terror and of loss remain.

I told her that my interest in the Holocaust had its beginnings in my childhood as I read stories of unspeakable horror and survival that made my own troubled childhood seem mild in comparison. I told her that I had long been fascinated to hear how people found ways to keep hope alive when all felt so hopeless and how they went on to have full and productive lives after such experiences.

She reacted to this mention of a less than idyllic childhood with surprise. "I never knew that," she said. "I never guessed. How did you grow up to be...so calm and...."

We both stopped, stunned, that in so many years, so many conversations, these details had never come up. What did we miss? What questions could we have asked each other? How could we not know?

The answers seem to be in secrets we keep and questions we don't ask -- both for a variety of reasons.

In some ways, this news about Liz is so congruent with the choices she has made in her life that I wonder how I could not have guessed before.

She has spent decades as a champion of freedom: a health educator and activist who has worked tirelessly in such causes as civil rights; women's rights and reproductive freedom; HIV research and funding; gay, lesbian and transgender issues and marriage equality. Our paths first crossed more than four decades ago when I first interviewed her for a magazine article and she later introduced me to the young doctor -- Chuck Wibbelsman -- with whom I would write "The Teenage Body Book", my most successful book. I have long admired her commitment to a variety of freedoms and her fearlessness in facing down bigotry and hate. But now I can see her many years of courage and dedication with a new perspective and appreciation.

I find now that she wants to talk about her past. Her silence over the years has been out of respect for others' desire not to know. "Some very close to me don't want to know what happened back then," she told me. "It isn't easy to hear..."

And yet some stories need to be heard. Liz is 93 and all too aware that the voices of those with direct experience in the Holocaust are becoming rarer and fainter. She has given testimony to Spielberg's Shoah project and participated in lectures with other survivors at schools and community centers. And she is sharing her thoughts and experiences with me because we can't be allowed to forget that time -- especially now with new terrors, fears and hatreds so prominent in headlines and touching all our lives.

It's a delicate balance for all of us. There are the secrets people keep at least in part because, like Liz, they feel others might find what they would like to say hard to hear. And there are secrets simply too painful to revisit with another. There are the questions we don't ask because we respect another's privacy...or because we are afraid of the answer.

And sometimes the backstories of treasured friends remain unshared because these seem unremarkable and unrecognized as pivotal in their lives. One friend, whose family moved repeatedly when he was young, realized only after exploring his childhood in therapy how these moves affected his sense of self. "I attended seven different elementary schools and three different high schools," he told me. "I was always the new kid, always an outsider, always a loner. And it influenced me to this day. I am very good at friendly banter, but I trust very few to get close."

Many backstories are not nearly as dramatic as the experiences Liz recently shared with me, and they're not always stories of triumph over tragedy and success despite steep odds. Sometimes we see a friend, an acquaintance or co-worker who is emotionally broken by his or her past, signaling distress by withdrawal, by a curt or unfriendly manner, by outbursts of anger and frustration over incidents that seem minor.

In such instances, there may be little to do but to understand that these actions have roots in a troubled past that you may never know and that the person is doing the best he or she can at the moment.

The same is true of friends who harbor painful secrets that need to stay buried, unrevealed and undiscussed, in order for them to function in daily life. One friend, who has indicated vaguely that she endured sexual abuse in her childhood and adolescence, is adamant that she doesn't feel ready and may never feel up to discussing it -- even with a therapist. In such instances, we need to respect another's silence.

We don't need to know details in order to treat another with love and kindness.

We don't need to ask questions that probe too deeply into another's pain, unless the friend expresses a desire to disclose and discuss a painful past. But there is so much we can learn by trying to understand someone whose formative past remains a mystery, by listening when a friend needs to talk, by sharing life histories, by celebrating each other's strengths and achievements that spring from living complex lives.

And when we suddenly discover that a friend has something unusually traumatic or dramatic in his or her past, this information can be illuminating, giving one a whole new way of seeing and understanding a treasured friend.

My long-time friend Maurice Sherbanee, for example, has always given a positive spin to his cosmopolitan background. He was born in Iraq, spent his adolescence in India and his young adult years in Japan before immigrating to the U.S. He celebrates the cultures and the languages he has embraced besides his native Arabic. But, for the nearly 50 years I've known him, there has been a sense of melancholy behind the good cheer that I never truly understood until lately. Not long ago, his niece Rachel shared the family's story: the terror they faced as Sephardic Jews in a land increasingly hostile to them, fleeing for their lives to India at the beginning of World War II, then making a new life for themselves in devastated post-war Japan as they waited to be admitted to the U.S. The immense sadness and fear of being stateless and rootless had a major impact on their family -- and is echoed by the countless refugees streaming out of the Middle East today.

Knowing a little more about his family's background helps me to better understand and honor Maurice's strong loyalty to his family, even when certain family members have been difficult, and why he has been so adamant about values rooted in a long-ago past.

New revelations about an old friend add to the richness of our understanding and new appreciation of a friend who is braver and more complex than we ever realized.

In sharing experiences with another whose life has included more tragedy than we may ever know, we can learn important lessons in compassion, in courage, in finding hope when life feels hopeless, in  embracing life despite its pain.

If we watch closely and listen, we can learn a great deal about affirming life's beauty by seeing someone who has been touched by hardship and tragedy embrace life as Liz Canfield has, living with incredible joy, passion, generosity, grace and love.