Valentine's Day was my least favorite holiday when I was growing up and watching, humiliated and heart-broken, as some of my grade school classmates got called up to the class Valentine box again and again while I sat disconsolately in my seat. If I were called up, it would be to get a tiny card given to me by another girl who -- like me -- wrote out Valentines for everyone in the class. I never got a Valentine from a boy --ever.

Once, in sixth grade, I bought a special Valentine card for Nicky Vianni, a cute and popular classmate on whom I had a very secret crush. I was too shy to sign my name, so merely signed it "Your Secret Admirer"  and dropped it in the class Valentine box when no one was looking. Nicky loved the card and was intrigued that he had a secret admirer. Who had dropped it in the box for him? My heart sank as he asked girl after girl if she had sent it. Finally, out of other options, he turned to me. Feeling my face turn a deep crimson, I admitted that I was his secret admirer. "You?" he said, trying without success to hide his disappointment. "Oh, well, thanks! It's a great card. Yes. Um. Well, thanks." And he hurried away.

But Valentine's Day wouldn't always be so bleak.

Ten years later, I held a Valentine in my hands that was heart-felt and from a guy. I was a senior in college. And there it was, in my dorm mailbox: my first Valentine! It was from the best possible person in my young life: my beloved friend Tim. The cover featured Juliet on a stage. Inside, it said "On my balcony, you're tops!"

I was thrilled. I stood there at the mailbox, just holding it, for a long time. Okay, so there were no sentiments of undying love, even though I dared to hope this was a sign that our friendship was evolving into something quite different. But even if it was simply a sweet declaration of friendship, I was delighted. It felt so wonderful to be remembered, to be thought of, to be loved as a friend (or maybe more) at long last on Valentine's Day!

And somehow, through all the romantic disappointment followed by renewed and joyous friendship that was to come, that card has stayed with me all these 46 years since, stashed securely in my memory and among treasured college mementos. 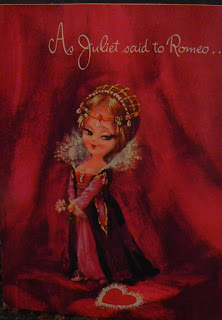 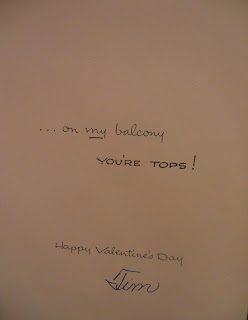 In the years since, I've received many Valentines from men who cared about and loved me. And such thoughtfulness has never ceased to delight me -- from my post-college dating days to the many Valentine's Days Bob and I have enjoyed together.

I have learned some important lessons along the way:

As time goes on, we come to realize that keeping a loving connection with another is much deeper and more meaningful than a Valentine's Day card -- or even chocolate.

We learn that love can mean saying you're sorry -- many, many times -- not only for the inevitable disappointments that daily life together can bring, but also for the pain that the world can inflict on a loved one. We learn that love is much more than romantic music and flowers. It can mean tending to a spouse who is unglamorously ill. It can mean finding sudden joy, together and by surprise, in unpromising circumstances. It can mean gratitude for a mature love that has weathered storms and challenges and moments of despair and still remains strong and enduring. And these lessons that the years bring are much sweeter than a pretty Valentine.

Yet, to this day, with all that I've learned and experienced in love, that first Valentine and the wonderful man who sent it, hold a special place in my heart.
Posted by Dr. Kathy McCoy at 8:14 AM