If my mother -- Ethel (aka Caron) Curtis McCoy -- were alive today, she would be celebrating her 100th birthday.

How different her world -- and ours -- would be had she lived to see this day, or even come close, instead of leaving this life when she was the age I am now.

How very much she missed: the adventures she dreamed of having after our father's death, when she had, at last, some hard-won freedom; seeing the professional successes we were to have -- my books, Michael's stellar medical career, Tai fulfilling Mother's dream for her to become a nurse.

But, even more, she died years before any grandchildren arrived. How she had longed for grandchildren! She even imagined that one of them might be a redhead. Her mother had red hair and she had always dreamed of having at least one ginger child. It didn't happen. But Nick, my sister's child, has beautiful red hair. How Mother would have loved and enjoyed her -- and what a difference it might have made to this child whose paternal grandparents were so rejecting of her because she was a girl and not the grandson they wanted. And how she would have cherished Maggie and Henry!

The Grandchildren She Never Knew 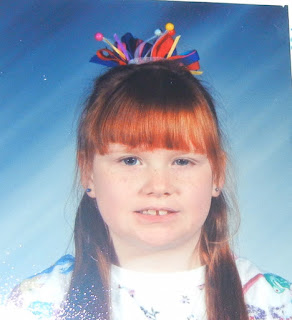 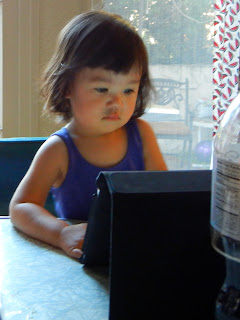 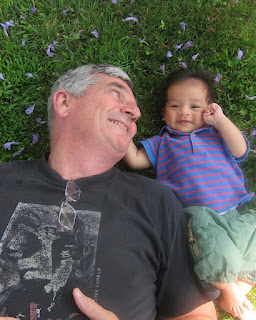 She was a wonderfully warm person whose early career success -- as a psychiatric nurse and then as one of American Airlines' first flight attendants -- was evidence of her intelligence, her independence and her lovely spirit that could make others feel so good about themselves and life in general. Because of her delightful personality and social skills, she often represented American in major publicity events -- in ads and in public events, like giving an aviation award to First Lady Eleanor Roosevelt -- and she had a scrapbook bulging with news clippings and photos from these wonderful years.

As children we looked through her scrapbook with wonder. When we were older, we felt sadness that her years thereafter had been so unrelentingly harsh. After she was gone, we rejoiced that she had known such happiness in her early adult years and, with time, we understood, with new clarity, what she had always told us: that she had also greatly enjoyed being a mother. And she never felt sorry for herself. She felt she had been blessed, as well as challenged, in every phase of her life.

FROM OUR MOTHER'S SCRAPBOOK 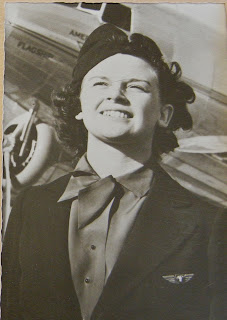 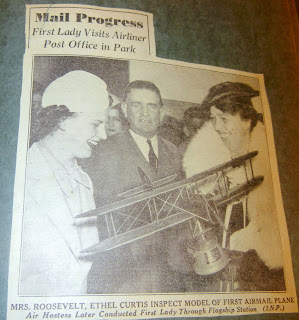 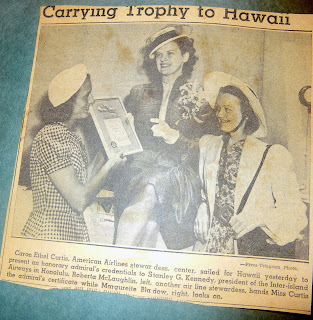 To Hawaii on behalf of American Airlines 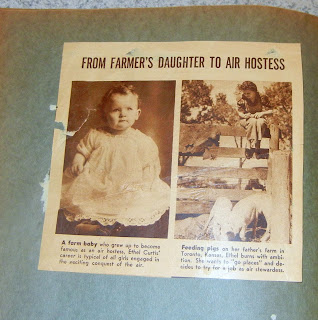 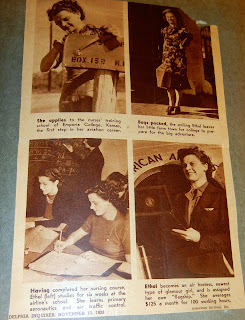 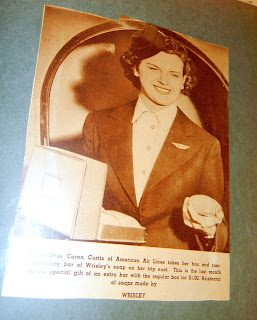 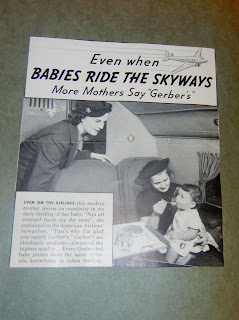 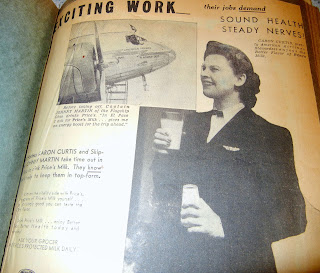 She modeled in a number of advertisements 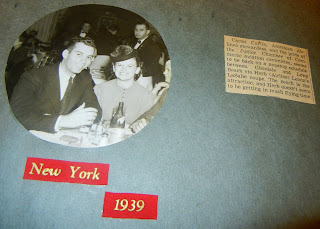 And made gossip columns, on the town with long-forgotten suitors

When she married, life quickly took a downward slide: the bright, funny, charismatic man she married turned out to be an abusive, mentally ill, alcoholic husband who dimmed her joyous spirit, crushed her sense of independence. Her life was filled with stress and depression. But never despair.

Like the sun peaking out behind clouds, she always had a wonderful sense of optimism, whether it was dreaming of moving to a new house where we would all have our own space and life would be better or of Father getting sober and back on track with his life or of us finding our own life paths, our own successes, our own happiness. "I just want you to be happy," she would say. "I want you to have the career you want and to love your work as I did and to find true love and live a full and contented life." No matter how terrible her own life was, day to day, she never stopped dreaming of better times for all of us.

And she had one great pleasure in life that we all shared: swimming. Her daily swims at the Pasadena Athletic Club over the years were soothing and energizing. And some of the sweetest times we all shared with her were the times we swam by her side, enjoying the warmth of the water and her presence.

When she died in 1980, our adult lives were just unfolding: Mike was in his last year of medical school at Stanford; Simon & Schuster had just published my first book and Bob and I had been married for three years; Tai, still so young, was nevertheless independent.

She missed so much. And we've missed her.  For the first few years after her sudden death from a heart attack, I suffered from a prolonged, complicated grief. Her loss was too painful to bear initially, so I avoided dealing with it by keeping busy -- Bob and I, joined by Mike after he finished medical school, cleaned out her home of many years; I dealt with the lawyer for both our parents' estates (our father had passed away four months before our mother); and I obsessed with keeping on my writing schedule, meeting the deadlines for the two books I was writing when my parents died. The grief only hit when life calmed down and then it was profound. My grief and depression was immobilizing. 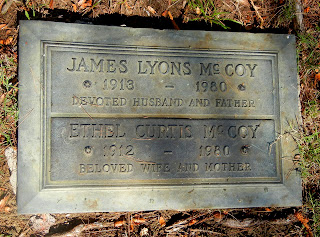 Then, one night, I had a dream.  I was swimming in the ocean off New Jersey, a place I had never been. My mother had always told me how she loved swimming in the warmer Atlantic rather than the cooler Pacific. And Gene Brissie, who was my editor at Simon & Schuster and who had offered warm and constant emotional support after my parents' deaths, was from New Jersey. So, perhaps because of my mother's talk about the Atlantic or the warm presence of Gene at a time when I so needed a caring friend, the New Jersey waters felt wonderfully soothing. Suddenly, my mother appeared, swimming at my side. I was filled with joy and relief. She wasn't dead! She was right here! "Oh, I've missed you so much!" I said. "Where have you been?"  She smiled, unusually taciturn. "Oh, around," she finally said, vaguely. "Never very far away."

We swam together, quietly content, warmly connected, for a few minutes. Then she began to sink under the water. "Please don't go! Please don't die! I can't lose you again!" I cried, diving down to catch her and swim with her to shore where I let her rest on the wet sand. "I love you so much!" I whispered, kissing her cool cheek. Her eyes opened and she smiled, looking into my eyes with great love. "If you love me, truly love me, you'll let me go," she said softly. "Do you love me enough to let me go?"

I closed my eyes, pained at the thought, as tears slid down my cheeks. "Yes, " I said at last, my eyes still squeezed shut. "Yes, I love you enough to let you go." I opened my eyes and she was gone, without leaving even the faintest impression on the sand. And I woke up then, my face wet with tears.

And from that moment, I felt a sense of peace and warmth and a comfort that had eluded me for so long. And, while I've missed my mother in so many ways, at so many times as the years have raced on, my debilitating grief was gone forever after that dream.

I got an email today from my brother Mike, now back working in Thailand and living in a beautiful condo in Bangkok with a great swimming pool he enjoys on a daily basis. "I was floating in the pool tonight, watching the full moon rise and thinking about Mother and that it would be her 100th birthday today" he wrote. "The last thing we ever did together was to go swimming, so I felt so connected, as I floated, to that time. How I wish she had lived to see her grandchildren. She would have been crazy about them."

He went on to tell me about going back up to the condo, where his wife Amp was playing with their children. Before he could tell her that he had been thinking about Mother or that it would have been her 100th birthday today, Amp rushed to tell him that something unusual had happened. She said that, sitting there, playing with the children, she had suddenly felt the odd, but positive presence of a spirit. An unusual light came into the room through the window and fell on Maggie and Henry. When Mike mentioned his feeling of connection to Mother and that this would have been her 100th birthday, Amp smiled, certain that it was Mother's spirit coming to take a look, drawn to those grandchildren we were certain she would never know. "Wouldn't it be wonderful if that were so?" he asked me in his email.

Through the years, through all our lives, through all the pain and peace of loving, losing and letting go, that connection remains with those we've loved and lost.

Perhaps, as my mother assured me in that long-ago dream, they're always around, never very far away.
Posted by Dr. Kathy McCoy at 7:57 AM