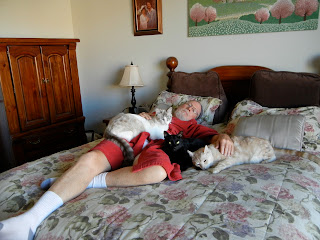 There are times when Bob's epilepsy-related depressions cause him to shut down for a few hours or even a day. At such times, the most therapeutic aspects of his life are his music and our three cats -- Gus, Maggie and SweetPea -- who rush to him at the first sign of distress and cover him with their soft, purring little bodies.  They seem to sense when he needs them and are invariably there for him -- for as long as it takes. Their devotion is both touching and amazing.

Our animals can be our personal angels in difficult times.  My neighbor Phyllis, who is suffering from cancer and who has had some very bad days recently, says that her black lab Daisy won't leave her side when she is struggling to breathe and that her macaw Billie snuggles against her chest, lifting her wings so Phyllis can stroke her soft undercoat, something she finds incredibly soothing.

Animals, especially dogs, have been used for some years in nursing homes and hospitals to comfort, soothe and lift the spirits of patients of all ages.  Service animals -- from seeing eye dogs to seizure alert animals --  help their human companions to gain greater independence and confidence in the world.

Animal-assisted therapy has also gained popularity in recent years.  Although this type of therapy was only a tiny part of my private practice, used only with a select few patients who requested such services, there were times when my official therapy cats Timmy and Marina were able to reach certain patients in unique ways.  Both were unusually outgoing, friendly with strangers and family alike, and incredibly loving. Timmy, a Burmese mix, gave special comfort to patients who were depressed or anxious, in some cases, wiping their tears with his soft little paws or his check or soothing them by curling up on a patient's lap, purring loudly.  Marina was a beautiful little flame-point Siamese. Her specialty was soothing warring couples or families, running from one to the other, helping them to calm down with her affection and happy little trills. Particularly for those who felt greater comfort with animals than with people, these therapy cats helped patients to relax and open up to me sooner or more completely than they might have otherwise. Sadly, both of these wonderful animals are no longer with us.  Timmy died of melamine poisoning from tainted cat food in 2007. Marina passed away from leukemia last May. But they leave a legacy of love. Recently, a former client of mine whose therapy was assisted by Timmy more than a decade ago, wrote to tell me how much he had touched her heart and helped her to heal.

What is it about animals that gives us such comfort, such a sense of safety and contentment? Could it be their trusting, non-judgmental natures? Their ability to love unconditionally, without question or hesitation? Their ability to use physical affection in a way we would rarely dare with a near stranger? Is it because they act on the sense that someone needs them instead of weighing options, wondering how much they want to get involved or worrying about being misunderstood? Is it because they offer quiet, warm support without challenging the validity of one's feelings or expecting a quick resolution?

With our beloved companion animals, it's likely to be all of the above. Some relationships between animals and their people are truly unique.

My Aunt Molly struggled with a variety of health problems in her last year of life.  She found great comfort in what the rest of us saw as an unlikely source: a surly, ailing Persian cat named Sugar, who looked all of his 18 years and more and who suffered from a fatal parasitic condition that had invaded his brain, triggering the sort of dementia that made him fly into a rage with visitors or retreat to the guest bathroom sink where he curled up, growling, for the duration of the visit. To our continuing amazement, Aunt Molly described him as a loving companion who slept beside her and comforted her when she awoke in pain many dark nights. When his vet said he had only days to live, we worried about the impact of his death on Aunt Molly. As it turned out, they died on the same day --- she of a heart attack first and then Sugar of his illness -- and their ashes were buried together -- per Aunt Molly's wishes. When his vet delivered Sugar's ashes to us, she said "He's a much nicer kitty now!"  Shaking her head, she added: "You know, I loved your aunt. She was a wonderful lady. But that was the most bad-assed cat I ever saw. He really lucked out when she chose him as an animal companion."  I couldn't help but think they had both lucked out -- that somehow, as improbable as it seemed, Aunt Molly saw something in Sugar none of the rest of us could see and that they were of immense comfort to each other as their lives came to an end.

The animals in our lives can be there for us in a way other family members can't always be.  They have no time constraints and ask so little -- beyond food, a walk, a loving touch. They can be, at times, heartbreakingly loyal to their people. They comfort, not with words, but with a touch, a look, their mere presence.

When I was a child in parochial school, the nuns used to tell us about our guardian angels and we would envision etherial, human-like beings with wings hovering just above us.  Now I think my guardian angel has fur and purrs and is sitting right here with her head on my hand -- impeding my typing and wonderfully enriching my life.
Posted by Dr. Kathy McCoy at 10:22 PM